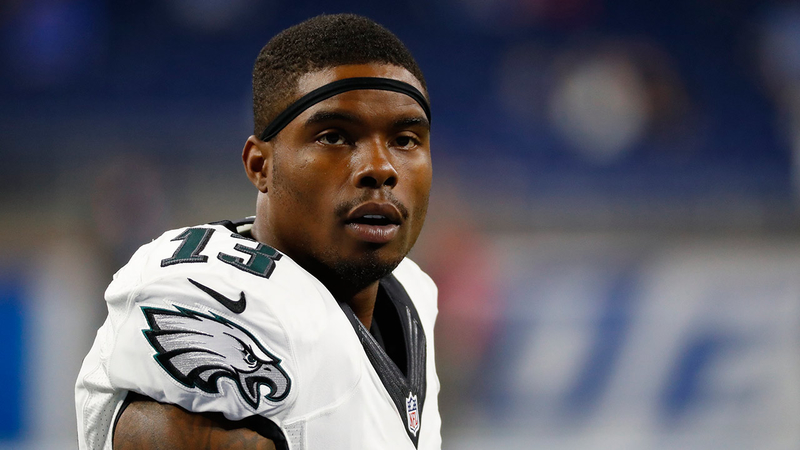 PHILADELPHIA (WPVI) -- Philadelphia Eagles wide receiver Josh Huff was charged Tuesday with possession of a 9 mm handgun without a permit and having a small amount of marijuana after he was pulled over for speeding, according to a court complaint.

Huff was pulled over on the New Jersey side of the Walt Whitman Bridge around 11 a.m. Tuesday.

After the officer asked about the smell of marijuana in the car, Huff handed over a container with suspected pot, and then informed the officer he had the gun in the driver side door pocket, the Delaware River Port Authority officer said in the complaint.

He faces charges for possessing the gun without a permit in New Jersey and for the magazine found with six hollow-point bullets. He also faces a disorderly persons offense for having less than 50 grams of marijuana, police said.

"The gun was not loaded so there's some positive aspects that we need to look into," Perri said.

Huff's gun is registered in Texas. It's recognized in Pennsylvania, but not New Jersey, which has notoriously strict gun laws.

Perri acknowledged he and his client face an uphill battle.

"These types of cases are difficult in every state across the country and all states are different. The fact is he had a valid permit to carry in Texas, the weapon was lawfully registered to him, it was not loaded while he was transporting the weapon," Perri said.

The Eagles said in a statement that they are aware of the incident and are gathering more information.
Huff was the Eagles' third-round pick in 2014 from Oregon. He has two touchdowns this season, including a 98-yard kick return.

The bridge connects New Jersey with south Philadelphia, near where the Eagles play and practice.