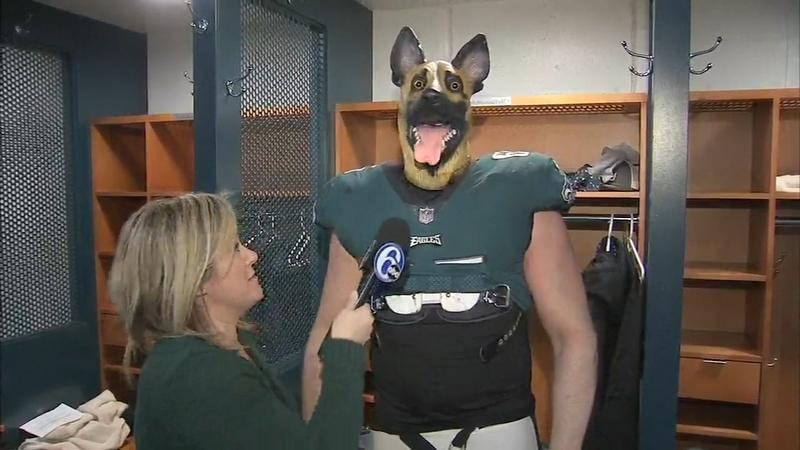 Boy, did they embrace it.

So much so that a pair of veterans, right tackle Lane Johnson and defensive end Chris Long, went out and bought dog masks -- German Shepherd masks, to be precise -- to sport in order to get into full character in the days leading up to the game.

"Me and Chris Long were talking [at lunch], and everybody's calling us underdogs, so hey, let's go get us a dog mask," Johnson said. "That's what we did."

Braves owe Phillies Chick-fil-A after Eagles win
The Philadelphia Phillies are expecting a nice meal thanks to the Eagles big win on Saturday.

"When did Carson [Wentz] go down? Since that point, no one's given us a chance," Eagles coach Doug Pederson coach, referring to the QB's Dec. 10 ACL tear. "I understand Carson's a great player, but every week our guys are hearing the same thing. Now, all of a sudden, we're not good enough? We're 13-3, best record in football, home-field advantage throughout.

The loss of Wentz certainly factored into the questions about the Eagles' playoff viability, as did the shaky play of his replacement, Nick Foles, to close out the regular season. On Saturday, the offense was up and down against Atlanta and found the end zone just once, but it was backed by a lights-out defense that came up with a big stand in the shadow of the end zone to close the game.

The Eagles advance as a result and await the winner of Sunday's game between the New Orleans Saints and Minnesota Vikings. Philadelphia will have home-field advantage again, but as of Saturday, would be underdogs against either foe (Vikings -4.5, Saints -3), per the Westgate Sportsbook.