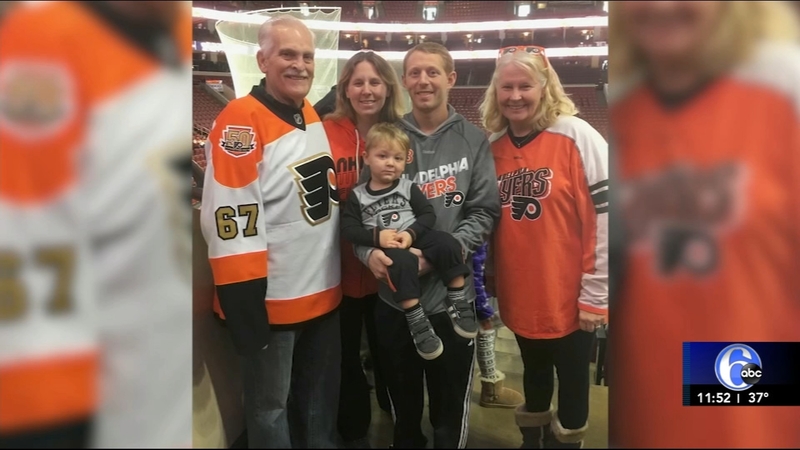 TREVOSE, Pennsylvania (WPVI) -- On Sunday, the Wells Fargo Center will welcome back Flyers fans for the first time in nearly a year.

The game will have special meaning for one Bucks County family.

"There's nothing like being there with the fans. The hollering," said Russell.

Thompson says one of his favorite stories is when he got hit in the mouth with a puck, back in the days with fewer nets.

"(Eric) Desjardins hit the puck. He was our defenseman, and it sailed up where we were. I didn't catch it, but my mouth did," said Russell. "I had some teeth knocked (loose). It was a little blood, no big deal."

He's been bedridden since having heart surgery last year.

His family was coming to terms with the possibility that his days of cheering on the Flyers in person were over.

When news broke that limited fans would be allowed into the Wells Fargo Center for Sunday's game against the Washington Capitals, his wife, Beverly, and daughter, Judy Uragano, started making calls.

For the 3,100 fans set to fill a fraction of the seats, getting into the arena will look and feel different, but officials say the overall experience will be the same.

They wondered if they could bring a stretcher and the medical equipment he needs into the arena.

"I just had to pull it all together. Get the ambulance people, get the permission," said Beverly.

Beverly says family and members of their church community have made donations to help them with the costs.

With a trip in an ambulance, Russell and his family will be in a suite for the game, along with a nurse and his youngest grandson, 2-year-old Isaac.

This event will be Isaac's very first Flyers game.

"I've taken every grandchild to a game. And I got 13 grandchildren. So they've all been there for one," said Russell.

This won't just be another Flyers game for this family.