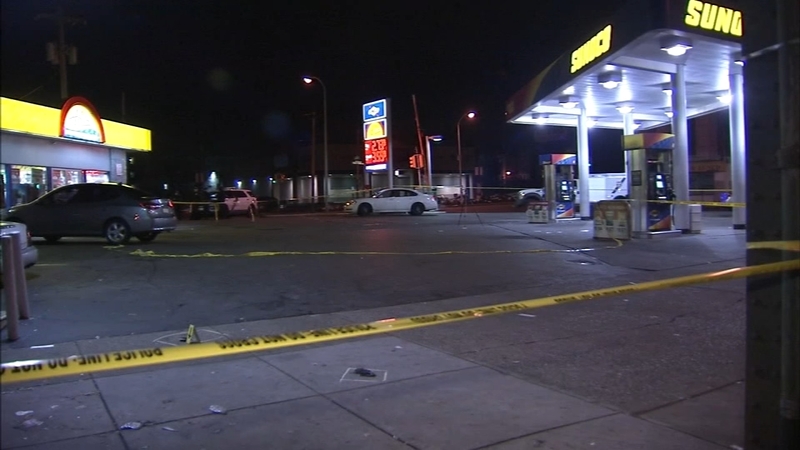 LOGAN (WPVI) -- Philadelphia police are looking for a man and a woman in connection with a shooting Monday night in a Sunoco parking lot in the Logan section of Philadelphia.

Jim Strate sells produce on the 5000 block of North Broad Street outside the Sunoco where the 31-year-old man was shot numerous times.

He heard the news when he arrived to work Tuesday morning - and the violence had him rattled.

"I was scared after I seen it, cause I am not used to all that, you know. Nobody bothers me so I've been here for 42 years," he said.

Officers arrived to find the victim with gunshots to the head and chest. He was transported to Einstein Medical Center in extremely critical condition. Police said the trouble started earlier inside the gas station's food shop.

Philadelphia Police Captain Sekou Kinebrew said, "Got into some sort of confrontation with a female. They both leave, but for whatever reason they both come back and she comes back in the company of a male. The male and the victim end up in some sort of a confrontation at which point the male pulls out a firearm -shoots multiple times and our victim is in pretty bad shape."

Captain Kinebrew said, "If anyone knows anything, maybe they left because of the gunshots. I don't blame them. They can call 911. They can hit us up on our website anonymously. They can call Northwest Detectives."

Police are working to enhance some video from the gas station.