At least a dozen shot, 3 killed, in shootings within a few hours across Philadelphia 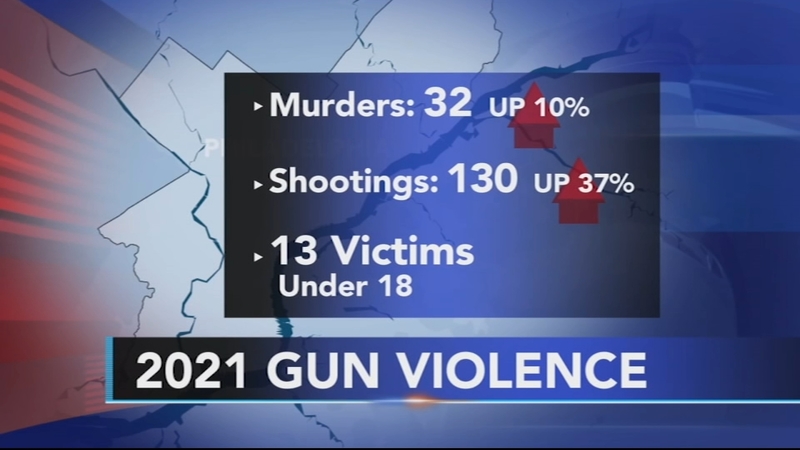 PHILADELPHIA (WPVI) -- At least a dozen people were shot, three of them were killed, in nine separate shootings that occurred within hours of each other in Philadelphia.

Police were called around 3:30 p.m. Wednesday to 41st and Aspen streets in Mantua, not far from Lancaster Avenue.

Roughly 30 minutes later, around 4 p.m., police responded to the 4700 block of Chestnut Street in West Philadelphia after a woman was shot twice.

Several shell casings were scattered on the sidewalk. She was taken to the hospital, but her condition was not released.

Then around 6:43 p.m. two people were shot on the 5000 block of North Camac street in the Logan section.

A 33-year-old man was shot in the left leg and was taken to the hospital in stable condition.

A 26-year-old man was shot seven times. He is hospitalized in critical condition.

Just before 7 p.m. Wednesday, police found a woman, 52, shot multiple times in her car, which was parked in front of her home on the 900 block of Hartel Avenue in Fox Chase.

The woman, identified as Gladys Coriano, was taken to the hospital but later died from her injuries.

Police said it was a drive-by shooting.

"The shooter was seen reaching out of the driver door window and firing shots from very close range into the victim's vehicle," said Chief Inspector Scott Small of the Philadelphia Police Department.

As a result of the investigation, the victim's ex-husband, idnetified as 55-year-old Adriano Coriano, has been charged with Murder (F1), VUFA (F2), and related offenses.

Two teenagers are recovering after they were shot while on the 2600 block of N. 17th Street in North Philadelphia around 9 p.m., according to authorities.

The shooting happened around 11 a.m. Wednesday on the 2300 block of Bouvier Street.

Police were also called to another shooting scene at 20th Street and Wharton Street in the city's Point Breeze section around 9:20 p.m. Wednesday.

Police said a man in his 40s was shot multiple times during a shootout. He is listed as very critical.

Investigators said it started as a drive-by and then shots were fired down the street.

After seeing surveillance video, police discovered that a person seen shooting might have been the victim, who somehow made it out of the car after being shot and started firing back.

All of this unfolded in front of people's homes.

"Based on ballistic evidence, we know at least 24 shots were fired from two separate caliber semi-automatic weapons," Small said.
There was another shooting scene around 9:30 p.m. along the 200 block of N. Felton Street in West Philadelphia.

Police said a 22-year-old man was shot multiple times. He was pronounced dead at the hospital.

Before the night was over, police heard gunshots in the area of 25th and Gordon street in Strawberry Mansion around 11 p.m.

"When police arrived on location, they found a 26-year-old male lying on the sidewalk," Small said.

That victim died at the scene. Police believe he lived just one block from where he was shot and killed.

Police say a 26-year-old man was gunned down in the Strawberry Mansion neighborhood.

Just before 1 a.m. Thursday, police said a 23-year-old man was shot in the knee on the 700 block of E Madison Street.

He is hospitalized in stable condition.

George Mosee, the executive directors of the Philadelphia Anti-Drug/Anti-Violence Network, said he believes the violence has a few contributing factors, including the pandemic and political unrest.

"In a panel discussion the other day, a young man shared with me although he lives on a block with 40 houses he probably only knows 8 people," he said.

A Philadelphia business owner said a lot of the problems in his neighborhood stem from a lack of jobs.

"They don't have no choice but to sell drugs, rob, steal," he said.

He says people need to feel like they matter and should start demanding job creating policies.

"Look around you, everything is boarded up. It's depressing," he said.