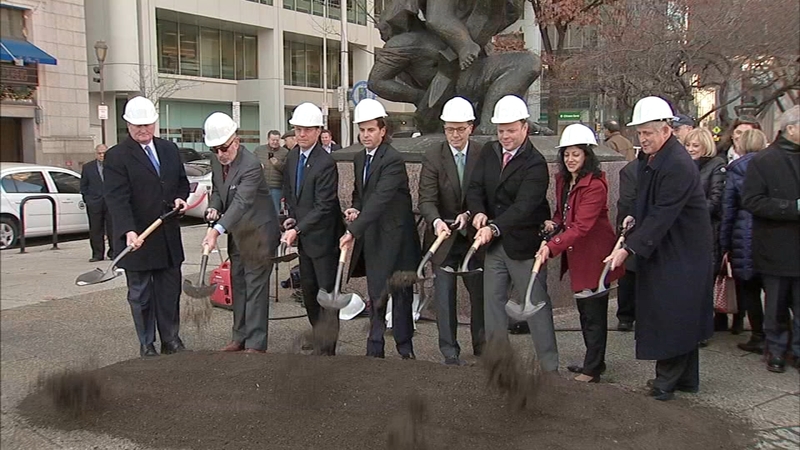 It was a landmark groundbreaking at 16th and The Parkway at the Philadelphia Holocaust Memorial Plaza, which is about to become a major state of the art facility with new trees and six pillars to honor the memory of the 6-million Jews murdered by the Nazis.

David Adelman of the Philadelphia Holocaust Remembrance Foundation said, "The plaza is not just a tribute to the Jews, political opponents, homosexuals and resistance fighters that were murdered in the Holocaust. It's a place for every Philadelphian and American."

Mayor Jim Kenney chose this platform to unleash an assault on the right wing emergence on the national level.

He said, "If you are a holocaust survivor or a family member of a survivor and you watched what you watched on television in Charlottesville, these folks have not gone away. They are still there. They were underground for a long time. But now they feel they have the power and ability to come up from the shadows and light these torches again."

This was emotional for the son of the late Nardus and Sipora Groen. His father fought the resistance against the 3rd Reich and his mother hid in a basement for 18 months before they could get their family to safety in the United States.

"For me it is a very emotional remembrance for every survivor. For that matter, children of survivors have a story, and every story is different and also the story is the same," Marcel Groen, son of survivors said.

The goal of this major upgrade of the Holocaust Memorial Plaza is to serve as a "living classroom."

The new construction is scheduled for completion in late 2018.