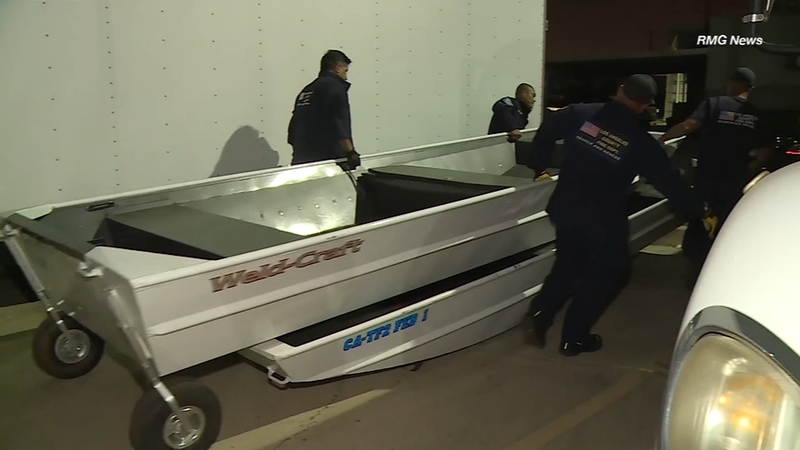 PHILADELPHIA (WPVI) -- It seems inevitable that the mass exodus of people would find its way here to the Delaware Valley, even Wednesday night they were still making their way here to escape the wrath of Florence.

Nick Signoretti, his wife Stephanie and their dog Hunter left Hubert, North Carolina Wednesday morning and have been driving ever since.

"We live in a trailer there so we weren't gonna stick around for that," he said. "Pretty much hoping we still have a house when we get back."

Chriss Voss from South Jersey has a home in the Outer Banks.

"Headed down there, spent the day putting everything away, furniture, everything, tying it down and make sure whatever comes in, it's prepared for it," he said.

Ken and Loretta Berger boarded up their home in Virginia Beach, Virginia and headed north.

"We just decided to pack up and leave because we were afraid that we were going to get hit by that girl named Florence," said Ken. "We're doubting our blessings but we're gonna visit 94-year-old mom in Milford, New Jersey."

There were still flights coming in and out of the affected areas into Philadelphia Wednesday afternoon, but as the day goes on, more cancellations were expected as Hurricane Florence moved closer to shore.

Freshman Alex Abel evacuated Coastal Carolina University. She arrived in Philadelphia on her way home to Boston after everyone on campus was required to leave.
"I found a train ride from Myrtle Beach to Philadelphia for like an 11-hour ride and stayed here and now I'm flying home to Boston," Abel said.

Florence is churning toward the East Coast, and by Wednesday afternoon time was running out to evacuate by plane. Many airlines are still waiving change fees.

Fog in Philadelphia already impacted many morning flights, and hurricane related cancellations will soon start coming, particularly for flights in and out of Virginia, the Carolinas, and even parts of Georgia.

"This is not unlike a winter storm situation. The airlines are very proactive, trying to get out in front of these situations so people don't show up at the airport only to find out their flight has been cancelled," Diane Gerace of the Philadelphia International Airport said.

But Guy Triano is heading toward the storm zone. Triano, the regional CEO of the American Red Cross of Eastern Pennsylvania, will act as a liaison with government agencies.

"As this storm is constantly moving and tracking, we will make sure those supplies and resources and individuals move with that," Triano said.