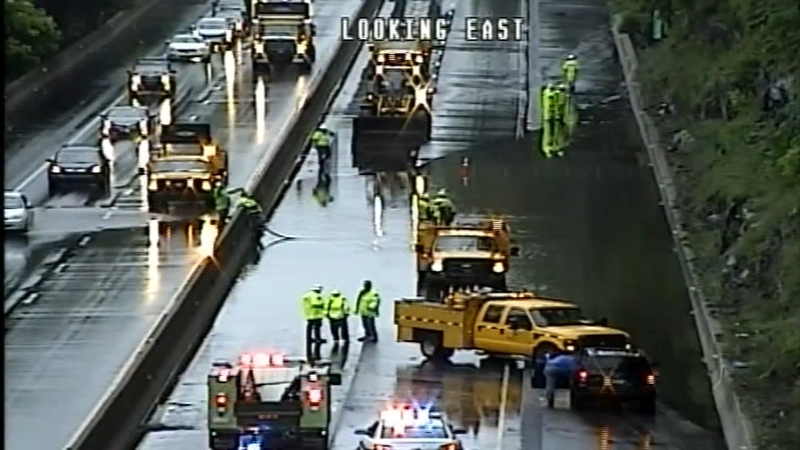 PHILADELPHIA (WPVI) -- A large part of the eastbound lanes of the Schuylkill Expressway were covered in mud Monday afternoon after floods consumed part of the roadway overnight.

The flood waters caused the eastbound side of I-76 to be shut down from I- 476 to Gladwyne for 9 hours Monday morning.

Commuters were stranded as cars stalled and had to be rescued.

"Coming this way should be 20 minutes," said Dawn Keer of Wynwood. "It took me an hour."

The detours also got people turned around and lost, having to stop and ask for help. For some, it meant there was no way getting to work.

"It took me about 40 Minutes to get to my complex, which is about 5 minutes away from 76," said Joe Maglio of Conshohocken. "So I just turned around, called my boss and told him I'm going to have to work from another office today."

PennDOT spokesperson Brad Rudolph says this was an isolated incident.

"It appears to be a cross pipe across the 76 expressway that was clogged up. Which then clogged up the inlet which clogged up the shoulder, and the right travel lane with water," said Rudolph.

But this is the second time the expressway was flooded in as many months.

Cell phone video shows the last time it happened in April, when the Expressway looked more like the Schuylkill River.

"The slopes are very unique. We used a lot of techniques from rock bolting to stepping to vegetation mats to try to absorb water and keep debris and mud off the roadway. But not all areas are addressed. But we continue to get out there and have future projects," said Rudolph.

Officials from PennDOT say that this is not the new normal.

They say as they progress in the project and identify areas that can become clogged the problem of flooding should be alleviated.