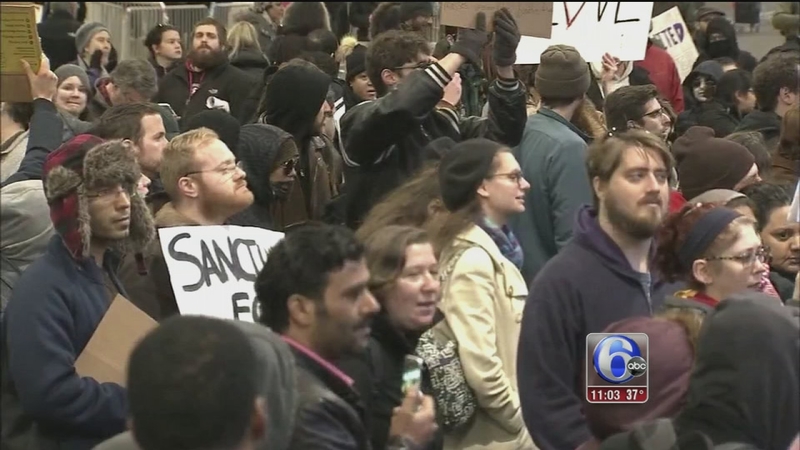 "It's good that people are coming out voicing their concerns," said Adam Accay of South Philadelphia.

Adam Accay's parents were born in Syria. His mother came out to fight for what she says was the America that welcomed her nearly 40 years ago.

"I'm so proud to be an American and we all should be proud and we should never let anything divide us," said Hined Akkeh of South Philadelphia.

Large crowd is mobilized and motivated at PHL. Chanting "Let them in!" Constitutional Rights are alive and well in Philadelphia. pic.twitter.com/toAck7g3gt

The protest kicked off just before 2 this afternoon. Crowds quickly flooded the roads, bringing traffic to a halt for hours on the I-95 airport ramps, causing people to miss their flights.

By late afternoon, protesters confronted dozens of police officers demanding they be let into the airport.

It was the second protest in two days. Demonstrators say they are speaking out against President Donald Trump's executive order placing temporary bans on entry into the U.S. of people from seven Muslim-majority countries.

Though as the night wore on, some stepped aside and said the message was losing its focus.

Protestors to police: "Who do you protect? Not us!" @6abc pic.twitter.com/8cd3Unz9Z3

"I don't think we are getting anywhere by lumping too many things together and attacking the police. They are here to protect us," said Rachel Street of South Philadelphia.

But police say interactions were largely peaceful. No arrests were made and only one person was cited with disorderly conduct.

"They were very warm to the police and very grateful for the job that we were doing, but I think a lot of people may have lost sight of the fact that there were a lot of innocent people impacted today, who missed flights and weren't able to get to the airport to pick up loved ones," said Philadelphia Police Chief Inspector Joe Sullivan.

"America is a proud nation of immigrants and we will continue to show compassion to those fleeing oppression, but we will do so while protecting our own citizens and border. America has always been the land of the free and home of the brave. We will keep it free and keep it safe, as the media knows, but refuses to say. My policy is similar to what President Obama did in 2011 when he banned visas for refugees from Iraq for six months. The seven countries named in the Executive Order are the same countries previously identified by the Obama administration as sources of terror. To be clear, this is not a Muslim ban, as the media is falsely reporting. This is not about religion - this is about terror and keeping our country safe. There are over 40 different countries worldwide that are majority Muslim that are not affected by this order. We will again be issuing visas to all countries once we are sure we have reviewed and implemented the most secure policies over the next 90 days. I have tremendous feeling for the people involved in this horrific humanitarian crisis in Syria. My first priority will always be to protect and serve our country, but as President I will find ways to help all those who are suffering."
Related topics:
protestphilly newstravelphiladelphia international airportpresident donald trump
Copyright © 2022 WPVI-TV. All Rights Reserved.
TOP STORIES
2 dead, 2 firefighters injured in South Jersey crash
AccuWeather Alert: Snowy Thursday Morning Commute
Woman says someone followed her in Center City using Apple AirTag
Clue about Gov. Murphy stumps 'Jeopardy!' contestants
French actor Gaspard Ulliel dies after ski accident
Website for free COVID tests is here. How does it work?
GM Howie Roseman expects Jalen Hurts to be Eagles' starting QB in 2022
Show More
Cobbs Creek Golf Course to receive $65M to begin reopen plans
Pa. high school football team shovels neighborhood instead of workout
Teens allowed to drive big rigs in new federal program
3rd person dies following hepatitis A outbreak in Montco
400M N95 masks available to the public for free starting next week
More TOP STORIES News