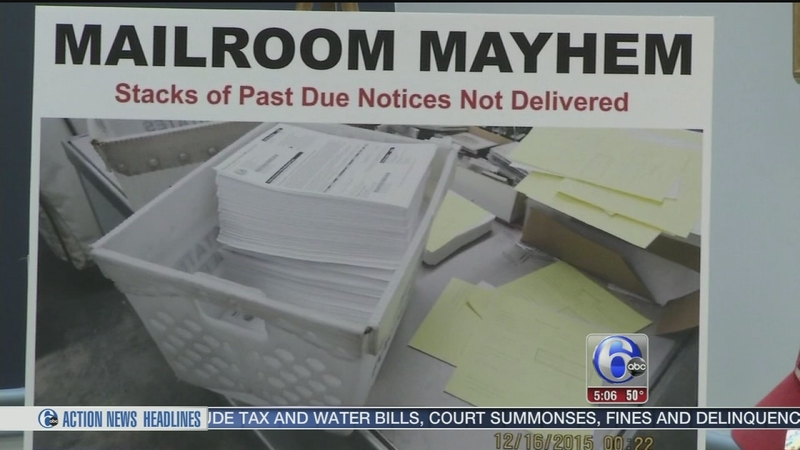 Vital documents were not processed on time, leaving people across Philadelphia open to some legal trouble, and fines.

The city's mail distribution center sits underground in a concourse beneath 17th and JFK. It's where the city processes bills, notices, fines, fees, court notices and sends them out for delivery.

But, on Tuesday, city controller Alan Butkovitz announced this his investigation found that much of that mail is not going out for delivery in a timely manner.

"We estimate that during our onsite visits as many as 10,000 pieces of mail were sitting in baskets, not being processed," Butkovitz said.

He displayed bins filled with mail, with items like water bills still sitting in the mailroom one day before they were due for payment.

Parking authority citations were also still there 10 days after they were dated, making it impossible for the recipient to avoid a fine.

And there was more:

Yan Ioshpa wasn't surprised. He was just leaving Traffic Court on Tuesday after paying a fine because the court said it didn't receive his payment for a citation on time.

"Now I have to pay $25 extra. I paid my ticket in full because - who am I - a small person against the government. You've got to comply," Ioshpa said.

A spokesperson for the Mayor's Office released a statement saying, "The Department of Revenue, which oversees the mailroom, has begun addressing issues related to the Mail Distribution Center. In addition, the Inspector General's office has an ongoing investigation with which we are cooperating. We invite the Controller to go to the Inspector General's Office to coordinate with them."

The controller also found that the mail center was overpaying for postage. They're advising people to contact the agency if they have a fine or bill and explain that they did not receive fair notice.