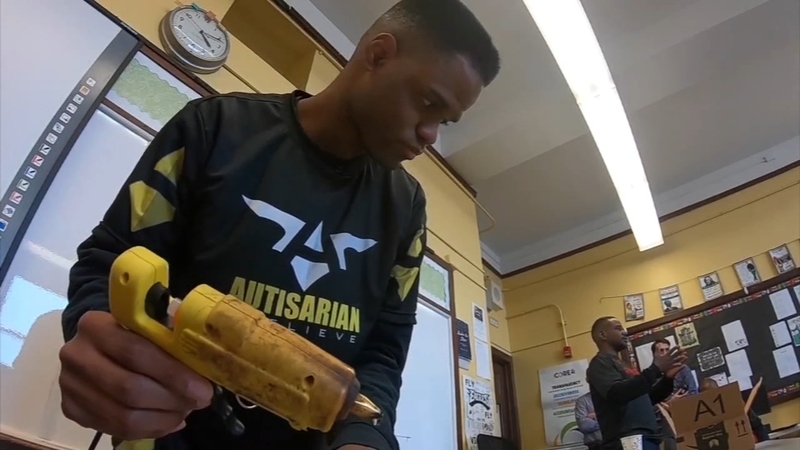 His ability is to create cardboard pieces of art simply from memory.

Like most superhumans he's part of an elite group. His team is the "Autisarians."

You see Smith, 32, has autism. But it's because of that he has the power to create these works of art.

He adds the Autisarian's are always taking new members.

Smith said, "If you want to become one you will keep trying and don't give up."

On Wednesday Smith puts his powers on display in front of students with autism who take part in the High Road Program at the Ferguson School in North Philadelphia.

His father Lonnie explained to the class they too can be Autisarians. They just need to believe.

He said, "Look inside and try to find that gift, listen. Look at those little things that might be going on."

In fact, Smith's second son is autistic too and together they created the Autisarian graphic novel about saving the world.

And Wednesday the students, like Nari Glenn, were truly inspired.

"I would like to be an Autisarian. When I grow up I'd like to be someone they look at and say how did they do this," Glenn said.
Report a correction or typo
Related topics:
educationphiladelphia newsautismeducationcommunity
Copyright © 2022 WPVI-TV. All Rights Reserved.
TOP STORIES
Truck with 100 monkeys crashes, 1 still on the loose, police say
Montco health department ties 10 hepatitis A cases back to restaurant
Two people dead in separate hit-and-run crashes in Philadelphia
NYPD officer killed, suspect is from Allentown
Shootout at Northern Liberties gas station
Driver dies in fiery crash in Port Richmond
AccuWeather: Frigid Start
Show More
Grocery stores faced with heavy impacts amid supply chain issues
Temple U updates mask guidelines ahead of students' return to campus
Police officers, good Samaritan lift SUV off trapped woman
Laundrie claimed responsibility for Petito's death in notebook: FBI
Conjoined twins separated at CHOP after 10-hour surgery
More TOP STORIES News