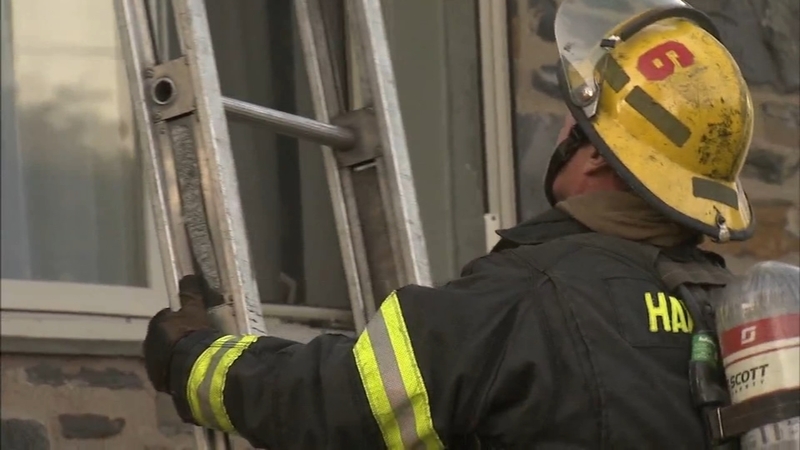 PHILADELPHIA (WPVI) -- Sirens blared for at least a minute across Philadelphia on Thursday as part of a fire drill designed to encourage all residents to think about fire safety.

"It means that much to us to make sure that the citizens are protected," said Deputy Fire Commissioner Craig Murphy. "Fire prevention happens 24/7, 365."

Murphy spoke to a crowd of residents outside the home of Lt. Ronald Monroe who offered his home and family as part of a "fire" simulation to remind residents of the dos and don'ts of fire preparedness.

"This evening, during the meal preparation, a pan of oil on the stove caught fire," echoed over the speaker.

That was the scenario. Within minutes sirens could be heard as firefighters raced down the street and began to stage as if responding to an actual emergency.

"The family makes their way to their neighbor's house, this here is their established meeting place," said the narrator.
That step is a crucial component of any escape plan, according to officials.

Fire officials also stressed the importance of smoke alarms, and carbon monoxide detectors, having at least two ways out of any room, and most important-- staying out of the home once you make the escape.

Some residents who caught the demo were in awe by the refresher and being schooled on what they thought they already knew.

Perhaps the most discussed: sleeping with your door closed to prevent a potentially deadly fire and smoke from entering the room.

"Pretty eye-opening stuff," said one resident about the drill.

"Very organized -- for that reason it makes us feel a lot safer," said another.

Murphy concluded by adding the department has recently received a FEMA grant that allows them to continue distributing free smoke alarms to residents who needs them.