Einstein and Jefferson sign letter of intent to merge 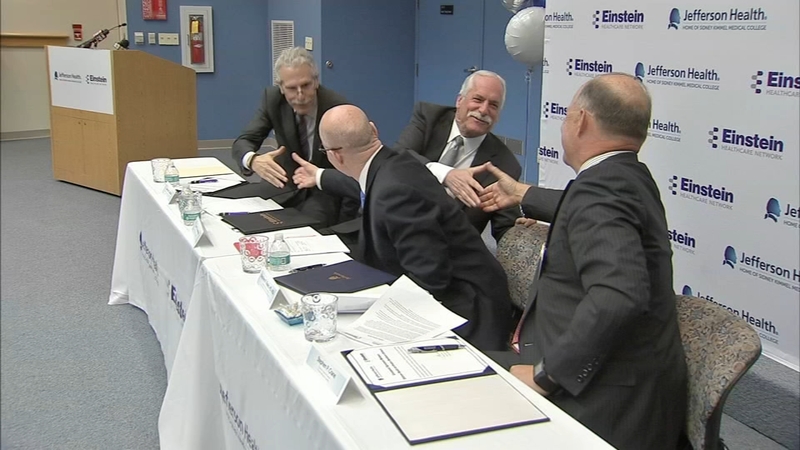 Einstein and Jefferson sign letter of intent to merge

PHILADELPHIA (WPVI) -- The Jefferson Health System is about to grow again.

With several signatures and hand-shakes, the intent to merge is sealed. If finalized, the agreement would bring Einstein Healthcare Network and Jefferson Health, currently 18 centers together as one integrated healthcare organization.

CEO of Jefferson Health Dr. Steven Klasko said, "We're hoping people will define Jefferson and Einstein not by our buildings but by the care and caring that we give."

Executives from both systems say the two share similar values, and merging will increase access to quality healthcare in the region.

CEO Einstein Healthcare Network Barry R. Freedman said, "We think each of us has excellent quality. We think combined it will be even better and we think there will be lower costs for the patient as we go forward."
EMBED More News Videos

Einstein Health to merge with Jefferson Health. Watch this report from Action News at 5pm on March 27, 2018.

The merger will combine two of the nation's top rehabilitation centers, Moss Rehab and Magee.

It will also create one of the largest graduate medical education programs in the country.

Chair of Emergency Medicine at Einstein Dr. Elizabeth Datner said, "We're training future caregivers and bringing people into the Philadelphia area and bringing better-qualified trainees, it can only be a good thing for all of us."

When Jefferson merged with Kennedy, layoff notices later went out to about 200 to 300 employees.
The CEO of Einstein can't deny there may be trimming but he also says there will be opportunities for growth.

"But those things are going on in healthcare anyway, the merger itself doesn't accelerate that," Freedman said.