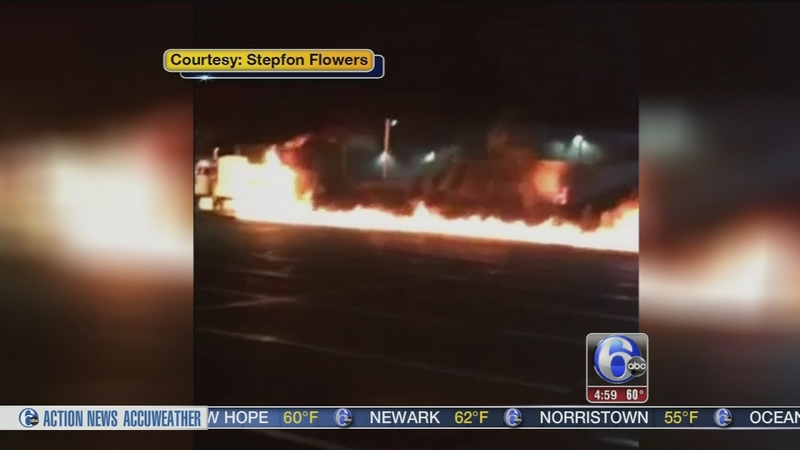 LAWNCREST (WPVI) -- A tractor trailer burst into flames at a gas station in the Lawncrest section of Philadelphia after being involved in a crash.

It happened just before 6:30 a.m. Tuesday in the 6300 block of Oxford Avenue near Levick Street.

Officials believe the driver of the tractor trailer, which was hauling goods from Shop Rite, hit an SUV before crashing into the Speedway gas station, narrowly missing gas pumps and snapping a utility pole in half.

He ran to help the driver of the SUV.

"I asked him if he could touch his legs, he started moving them. I held his hand asked if he could feel my hand, he said 'Yeah.' All he said was he is dizzy and couldn't remember nothing. He said 'where am I, where am I?' And I said 'as long as you're living, you're good," said Yean.

The truck came to rest in the gas station parking lot. Fire crews were able to access the emergency stop to halt the flow of gasoline.

The fire did not spread to the gas station.

Officials say this could have been a catastrophe.

"Saw it was a two vehicle accident with the truck fully involved," said Capt. William Dixon. "When I say fully involved, fire with flames shooting 50 feet up into the air."

The driver of the big rig walked away uninjured and was on scene retrieving belongings Tuesday afternoon.

The driver of the SUV was taken to the hospital in stable condition.

PECO was called to the scene to shut off utility lines that came down due to the crash.

L&I was also summoned to the scene, along with the water department to deal with a fuel spill.