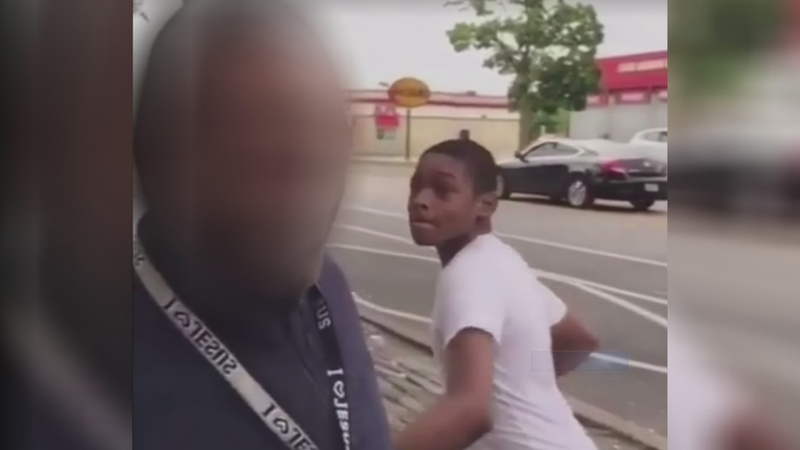 LOGAN (WPVI) -- Police have identified the four boys, ranging in age from 12 to 15, seen in a viral video of an assault on a mentally challenged man.

All four boys were apprehended by police Tuesday, but were released to the custody of their parents. Action News is told charges are pending.

The slow-motion disturbing video that was posted to Facebook begins with the victim looking into the camera, wearing an "I love Jesus" lanyard around his neck.

One juvenile winds up and delivers the first punch right to the victim's face. The other young men look on laughing. The victim reels back in shock and pain. The victim attempts to flee and another young man chases him and punches him in the face again.

"Obviously, the video is very disturbing. It appears this male, who is 38 years old, was targeted because he is mentally challenged. It's a senseless act of violence," Philadelphia Police Captain Malachi Jones said.

The video has been viewed millions of times on Facebook since it was posted on Monday.

Police were made aware of the content and determined the video was recorded on Memorial Day at Chelten Avenue and Knox Street in Germantown. They said neighbors and others came forward with essential information that helped them identify the young suspects.

Three of the boys were picked up by police at school Tuesday. Another 15-year-old boy who delivered the second punch was apprehended Tuesday night, sources tell Action News

"To them, they might have thought this was clever, but my message to them and kids in general is to do more constructive things with your time. Because you shouldn't be out there messing with people," Jones said.

Police believe two of the boys connected to this videotaped incident were also involved in an attack on a school principal involving bricks last Friday.

The boys could face charges including aggravated assault.