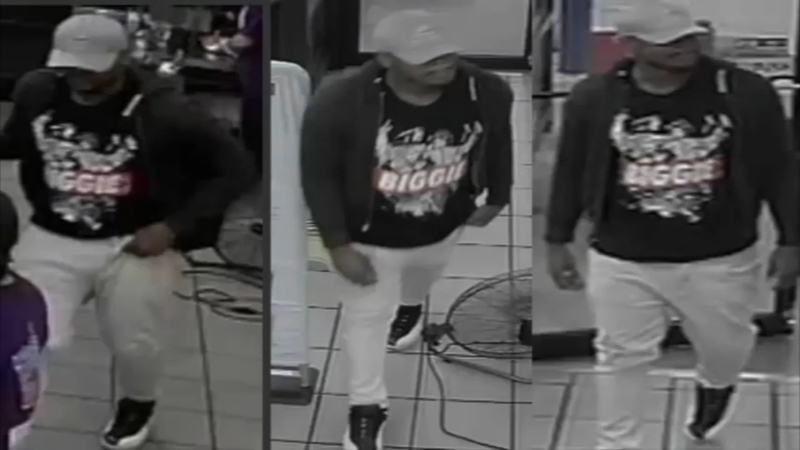 NORTHEAST PHILADELPHIA (WPVI) -- Police are looking for a man wanted for more than a half-dozen robberies in Northeast Philadelphia.

In each robbery, police say the suspect demanded money from employees, with a knife in hand.

Investigators released the following details about the incidents:

Incident #1: On Saturday, July 21, 2018, at 7:00 pm, an unknown black male entered the Cricket Wireless store located at 8201 Stenton Avenue and acted as if to be shopping for a phone. Suddenly the suspect rushed behind the counter, brandished a knife and demanded all the money from the cash register. The employee opened the register at which time the offender took $418. The offender fled the store on foot towards Stenton Avenue. No injuries were reported as a result of this robbery.

Incident #2: July 23, 2018, 6:25 p.m. at 2060 Cottman Avenue. The offender entered the Little Caesars Pizza, walked behind the counter, pulled out a knife and demanded money. The complainant was unable to open the register and the male fled without getting anything.
Suspect Description: Black male, 20-25 years-of-age, wearing a black hooded sweatshirt, white T-shirt, gray pants, black & white sneakers, and a gray baseball cap.

Incident #3: July 23, 2018, 7:25 pm at 5498 Oxford Avenue The offender entered the McDonalds, waited until the crowd diminished then went behind the counter, pulled out a knife, and removed cash from the register and fled the location.
Suspect Description: Black male, medium complexion, 6'2", wearing a black hooded sweatshirt, a white t-shirt, gray sweatpants, black & white sneakers, and a gray baseball cap.

Incident #4: July 25, 2018 4:00 pm, at 721 Adams Avenue The offender entered the Metro PCS, went behind the counter, pulled out a knife and removed money from the register. The male then fled the location.

Incident #5: July 27, 2018, 7:50 pm at 7221 Torresdale Avenue The offender entered the Dunkin Donuts, walked behind the counter, produced a knife and demanded money. The employee said "What?" and the male left without getting anything.

Phila. Detectives looking for this man in gray baseball cap, gray sweatpants, black & white sneakers - driving a 2009-10 Sonata w/ front end damage. Using a knife he has robbed ten shops in the last 18 days. If you recognize him you are urged to call Northeast Det. 215-686-3153 pic.twitter.com/8BIpwiXLBt

Incident #6: July 27, 2018, 9:45 pm, at 3668 Aramingo Avenue. The offender walked into Little Caesars, walked behind the counter, produced a knife with a black handle and demanded she open the registers. The complainant did so and the male removed the money from the registers.

Incident #7: July 30, 2018, 4:50 pm at 1555 Wadsworth Avenue. Complainant stated an unknown black male entered the METRO PCS, pointed a large kitchen knife at her and the witness while demanding them to open the cash drawer. The offender went behind the counter and took $300 from the register. After a brief struggle, the offender fled the location northbound on Pickering Ave. The complainant and witness were not injured.

Incident #8: August 1, 2018, 6:35 pm, 7107 Torresdale Avenue. Little Caesars Restaurant employee informed officers that an unknown black male came into the store and came around the counter with a knife. The male told her to open the register. The witness complied and the offender took an unknown amount of money from the register without touching anything else. The offender fled southbound on Frankford towards Princeton Avenue.
Suspect Description: Black male, with a scruffy beard about 6'0", muscular wearing a white tee shirt blue jeans that were low, a red and white hat and peach underwear. Armed with a silver knife with a black handle.

Incident #9: August 2, 2018 6:40 pm, at 3572 Aramingo Avenue The offender entered the store (Boost Mobile) armed with a kitchen knife. The offender then made his way behind the counter and demanded money. Employees were able to press the panic alarm button, causing the offender to leave without taking anything.

If you recognize this man, you're encouraged to call police right away.