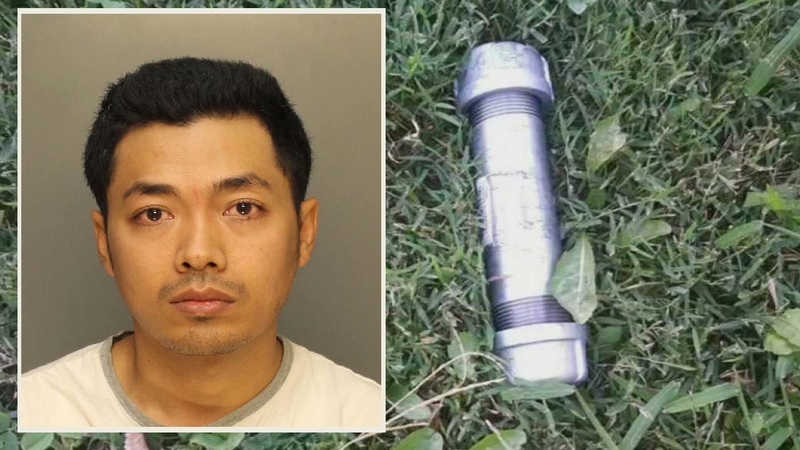 Sam Chey, 34, was charged with having weapons of mass destruction and risking a catastrophe.

Investigators spent several hours Wednesday at the home in the 6100 block of Fairhill Street. The Philadelphia Bomb Squad on the scene began removing and photographing objects from inside the home.

It all started around 10 a.m. when the sheriff's department arrived to serve an eviction notice.

"They were encountered by a woman at the door who said 'try not to touch anything in the basement.' They advised the movers who were here that if they saw anything suspicious to alert them," Joseph Blake of the Philadelphia Sheriff's Department said.

The movers came upon two pipes and what may be explosive material fell out of one of them. That's when the bomb squad was called.

"The immediate concern were those two devices that they found," Blake said.

Investigators pieced together that the homeowner, who was on the scene with her son, was allowing Chey to live in her basement.
Chey told police the objects belong to him. He said he is a handyman and trash man.

They also found a disassembled shotgun and handgun; both are owned by Chey.

As she left the house with a suitcase, the homeowner told Action News police did find, as she described it, "bombs" in the basement, but she doesn't know how they got there.

"The basement, someone put two bombs there," the homeowner said.

Neighbors were curious about what was going on, but said they didn't know the residents of the home.

"It's a nice quiet block. I didn't even know that anything would be on here like that. I guess anything can happen anywhere," a neighbor said.