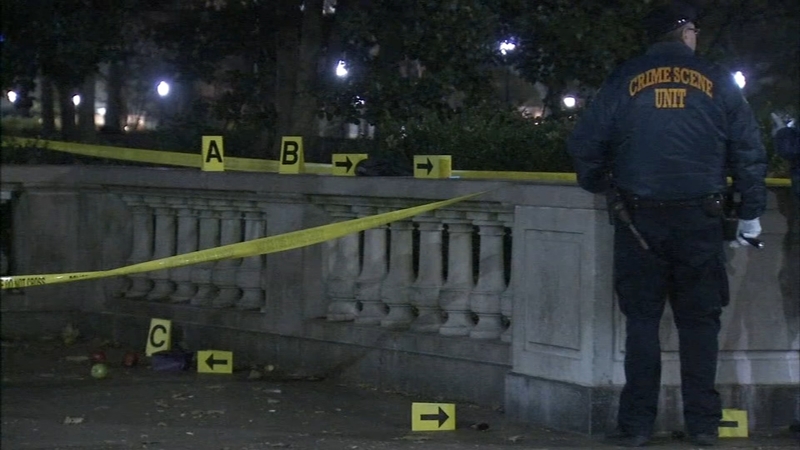 PHILADELPHIA (WPVI) -- Residents like Susan Goldberg have seen Rittenhouse Square go through many changes over the years. Some of the latest changes have been concerning.

"I don't even walk through the park," she says, noting her concerns over what happens in the park at night with a growing homeless population living there.

Philadelphia police say a homeless man was the victim of a violent crime Thursday night as he was stabbed in the back multiple times.

The crime happened at around 10 p.m. in Rittenhouse Square. 911 dispatchers received a frantic phone call at 10:11 p.m., and police heard a person screaming when they arrived on the scene.

"According to a civilian witness, there was a group of a possibly eight individuals, possibly in their early 20s drinking and fighting," said Captain Jason Smith of the Philadelphia Police Department.

Police think all of the people in that group were men. It's not clear if the victim was a part of that group.

When investigators arrived the victim, identified as 51-year-old Dean Jordan, standing at the southwest corner of the park bleeding heavily. Police say he refused to cooperate with officers. He also didn't identify two men whom police were questioning.

"There were two males who were stopped by police. They were subsequently cleared," said Smith.

The only description the police have of the suspects is that they were a group of men in their 20s. One may have been wearing a red jacket.

Jordan initially refused treatment from first responders. Eventually, they convinced him to get in an ambulance to go to Jefferson Hospital. He was pronounced dead at 11:54 p.m. Jordan was homeless and known to stay in Rittenhouse Square.

"That's tragic," said Adaria Lingham who often walks through the park on weekdays.

Residents hope police will step up patrols in the area.

"What I'd love to see is maybe more police presence," said Adolph Sims, who says he usually feels safe walking around the park. "Sometimes I feel like I do see (police patrols), but maybe we needed more at night time."