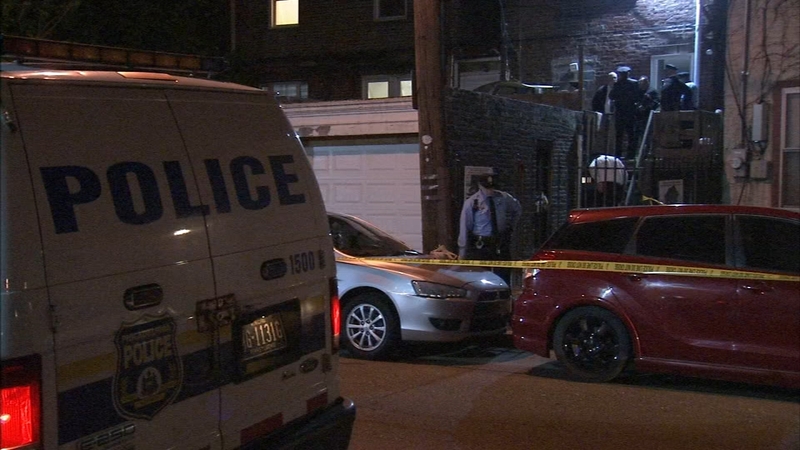 PHILADELPHIA (WPVI) -- A father and son were shot after walking into their Philadelphia home while a burglary was in progress, police said.

According to authorities, the family of four had returned to the home on the 5200 block of Marlow Street in Frankford around 9:45 p.m. Monday after shopping at Home Depot.

Once inside, police said they encountered at least two males who the family did not know.

"I heard like over ten shots. A lot of gunshots," said Hicks. "I see the man get up trying to walk, and he just collapsed to the ground."

Philadelphia police are investigating a shooting that left a father and son injured on Monday night.

Both victims were taken to Temple University Hospital.

The 33-year-old father was hit in his arms, legs, and torso. He is listed in critical condition.

The 12-year-old son was grazed in the chest. He was treated and released.

Ruth Wright of Frankford was stunned.

"I'm so sorry to hear that, but I'm glad they're recovering and everything."

Police said the father, who has a permit, was carrying a gun. They are not sure if he fired any shots.

"We know there could've been a gun battle in the house, and we're fortunate it appears the victims will be fine at the end of this," Philadelphia Police Captain John Walker said.

Police believe both intruders were in their mid-to-late 20's.

Investigators tell Action News, one burglar was described as tall and heavyset, wearing a gray jacket. The other was even taller with a tattoo on his left arm. He was wearing a red and blue jacket.

A gold colored minivan or SUV was spotted leaving the scene.