Minivan repossessed and towed as child sleeps inside in West Philadelphia 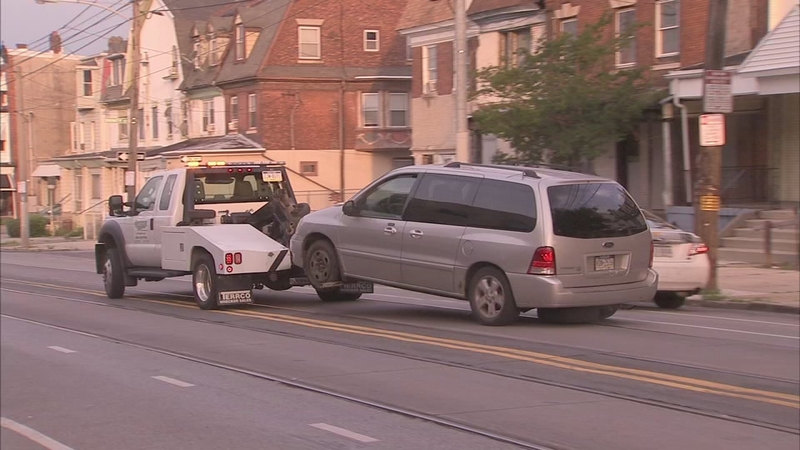 VIDEO: Minivan repossessed and towed as child sleeps inside

SOUTHWEST PHILADELPHIA (WPVI) -- Police are trying to sort out a repo mishap. It all started with a routine repossession of a van in West Philadelphia. But blocks away, police made an unexpected discovery inside - a girl in the back seat.

Police are hoping surveillance video from a Domino's Pizza can help clear up what happened.

The incident began at 2:30 a.m. Thursday in West Philadelphia.

Police tell Action News it seems the girl's mother was working as a pizza delivery driver in the evening hours and had her 7-year-old daughter in the van with her.

The vehicle was double parked out in front of the pizza place when it was repossessed with the girl asleep inside.

Carmino Giannone tells Action News he had no idea there was a 7-year-old girl sleeping in the back of the 2006 Ford Minivan when he hitched the vehicle up to his tow truck and drove off with it under orders to repossess it.

Watch Action Cam video as the tow truck driver talks about what happened when he repossessed a minivan with a child sleeping inside.

"I could visually see right through the back of the car, and there was no occupants of the vehicle. So, that means I can take the car and that's what I did," Giannone said.

Police say the 26-year-old owner of the van worked at a Domino's as a delivery driver.

At 2:35 a.m., she was finishing up for the night inside the pizza place at 45th and Chestnut when Giannone drove away with her van.

Giannone says he switched on his body cam just prior, searched the van from outside, saw nothing and drove away.

Watch Action Cam video on the scene where a minivan was towed away with a child sleeping inside.

He did hear screams from the girl's mother and others as he left.

"We see that all the time where people try to as a deterrent try to get me to stop - 'Oh let me check the car,' you know what I mean? Obviously, I am going to get out of the danger zone before I check that," Giannone said.

A bike officer pulled him over. They still didn't see the girl inside the locked vehicle.

Then at 50th and Woodland he met up with police again and an officer spotted the child's leg.

The girl was soon reunited with her mother. Police will decide if charges are warranted.

"If it's deemed that the mother leaving the child in the car was in some way negligent or posed a danger to the child, the appropriate charge would be endangering the welfare of a child," said Philadelphia Police Capt. Sekou Kinebrew.

Giannone says the police let him go without any charges. Special Victims is now investigating because of the child's age. She's in the care of other family members.

The child's mother was held on a warrant for a Camden County burglary. She has not been charged in connection with this case.