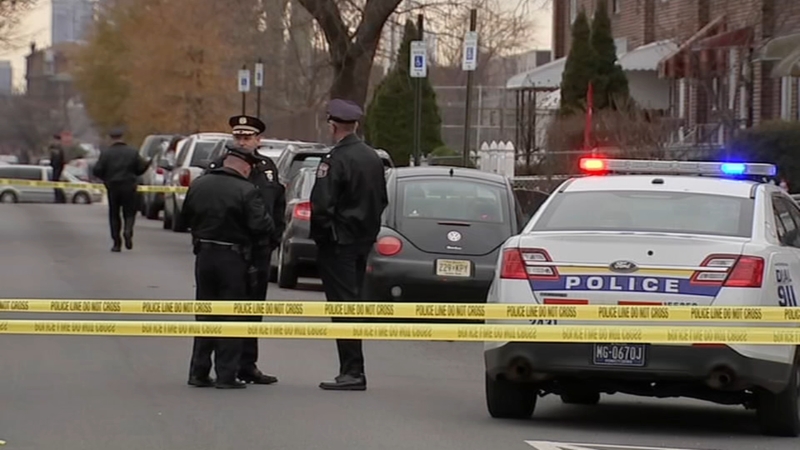 PHILADELPHIA (WPVI) -- A Philadelphia police officer responding to a fight shot and killed a knife-wielding man who fled into a neighborhood home, according to authorities.

Officers in the 24th District were called to the 3500 block of Belgrade Street in Port Richmond around 8:45 a.m. Wednesday.

The first responding officer arrived to find an altercation on the street involving a large group of civilians.

Philadelphia Police Captain Sekou Kinebrew said people began alerting the officer to someone, by pointing and saying "That's him, officer! That's him!"

That's when a male suspect entered a home on the street across from a cemetery.

Police soon learned that the property was not affiliated with the man in any way. He didn't live there and didn't know the homeowner, Kinebrew said.

Tom Fitzmaurice from Port Richmond said he was at work when he received a phone call that left him terrified.

"I got a phone call from my wife that somebody pulled the door open and ran into the house," he said.

Fitzmaurice's wife and 4-year-old granddaughter were walking out of their home when the man ran in. Before they could leave, the man entered the home.

"She was coming out the door to take my granddaughter to school and she's like 'Wow, these guys are fighting and there's a cop' and next thing she knows the guy just pulls the door open and ran in," he said.

Police said the man only chose that house because the door was open.

Fitzmaurice says his loved ones then darted upstairs and the police officer quickly followed the suspect into the home, near the kitchen, on the first floor.

Police said the officer asked the man to show his hands, and the officer, holding a Taser, continued to give the command to the suspect but police said he wouldn't comply.

"When the individual did show his hands, he actually produced a knife," Kinebrew said.

Police are not sure if the knife belonged to the man or if he obtained it from the home.

At that point, police said the officer holstered his Taser and took out his gun. The officer, a 16-year veteran of the force, then gave the suspect additional commands.

"At that point, the male lunged at the officer in aggressive fashion with the knife. The officer discharged his city-issued firearm one time, striking the male one time in the chest," Kinebrew said.

Additional officers arrived and were able to get the knife away from the suspect.

Officers took the man into custody and transported him to Temple University Hospital. He was pronounced dead at 9:20 a.m. at the hospital.
The Officer-Involved Shooting Investigation Unit is now working the case. They will be interviewing witnesses and other officers.

Police are continuing to investigate what caused the initial commotion on the block.

Police are not sure if the woman and the child were inside the home or had already fled at the time of the shooting, but they were not injured.
------
Send a News Tip to Action News
Learn More About 6abc Apps
Report a correction or typo
Related topics:
police involved shootingdeadly shootingfatal shootingphilly newsshooting
Copyright © 2022 WPVI-TV. All Rights Reserved.
TOP STORIES
AccuWeather: Winter Storm Warning For Parts Of Our Area
Surveillance video shows altercation that led to Coatesville shooting
5-year-old boy found by good Samaritan after boarding wrong bus
Drexel Wrestling Team is full of brotherly love
Officials investigate homicide after woman found dead inside NJ home
Delco man lucky to be alive after hit-and-run outside home
Jersey Shore preparing for snow storm Friday evening
Show More
'The Ice Age Adventures of Buck Wild' heading to Disney+
Toddler credited with saving family of 7 from devastating house fire
3 charged in assault of NJ man before he went missing
Student burned inside Chester County learning center
Gunman follows woman home after accidental bump at market: Police
More TOP STORIES News