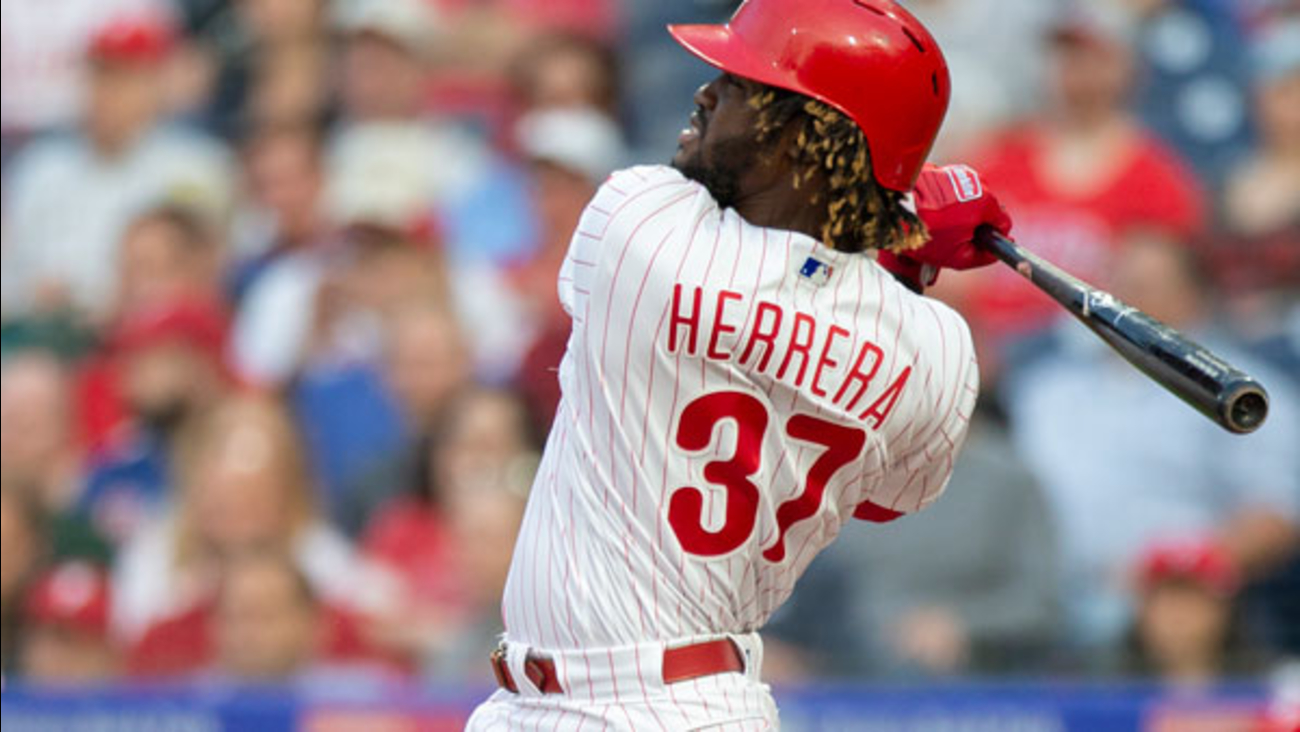 PHILADELPHIA -- It was another nice night for Odubel Herrera. The rest of Philadelphia's lineup looked pretty good, too.

Carlos Santana and Cesar Hernandez also connected for Philadelphia, which had dropped six of eight. Santana drove in four runs, and Hernandez had two RBIs.

Eflin (1-0) struck out a career-high nine in 6 2/3 innings. He allowed four hits and walked three.

Herrera hit a three-run drive off Jeff Samardzija (1-2) in the first and a two-run shot off D.J. Snelten in the sixth. He also walked and scored in the fifth when Santana's drive popped out of the glove of Gorkys Hernandez as his back hit the wall in center, resulting in a three-run homer.

"Odubel continues to get big hits for us," manager Gabe Kapler said. "There are times when you take for granted what it does for a dugout when you get a big home run. Odubel did that for us tonight and we were able to extend the lead."

Herrera has reached base in his last 36 games dating to last year, the longest such streak for the Phillies since Jimmy Rollins had a 38-game run between the 2005-06 seasons. He is batting .341 this year.

"I feel very, very good right now," Herrera said. "It's part of being selective. I want to be disciplined at the plate. I don't want to swing at bad pitches- I only want to swing at good pitches."

Samardzija allowed five runs and four hits in four innings in his fourth start after beginning the season on the disabled list with a right pectoral strain.

"I was encouraged, really," Giants manager Bruce Bochy said. "He was back to having his normal stuff and velocity and everything. Now, he's got to have his command - he was up and not hitting spots. It was just an off night for everyone. You could tell he was very strong tonight. He's on the right track now."

It was Eflin's first major league win since he pitched seven solid innings at Atlanta on Aug. 8. The right-hander was promoted from the minors after Ben Lively hurt his back in late April, and he worked six effective innings in a no-decision at Miami in his first start last Tuesday.

Giants: RHP Johnny Cueto was diagnosed with a right elbow strain and will miss six to eight weeks, avoiding season-ending Tommy John surgery. The diagnosis comes after a visit with Dr. James Andrews on Monday in Gulf Breeze, Florida. ... OF Hunter Pence had the clock stopped on his rehabilitation assignment with Triple-A Sacramento after experiencing soreness in his right thumb that he sprained on April 19. ... Closer Mark Melancon will throw another bullpen session on Tuesday in his attempt to return from a right elbow flexor strain.

Phillies: LHP Adam Morgan was placed on the 10-day disabled list with a back strain. Morgan had appeared in 17 games, going 0-0 with a 2.45 ERA. RH reliever Seranthony Dominguez was recalled from Triple-A Lehigh Valley. Dominiguez made his major league debut against the Giants, tossing a scoreless eighth inning.

Giants: LHP Derek Holland (1-3, 5.70 ERA) picked up his first win of the season Wednesday, pitching five innings of three-run ball during a 9-4 victory against San Diego. Tuesday's outing will be Holland's first career appearance against Philadelphia.