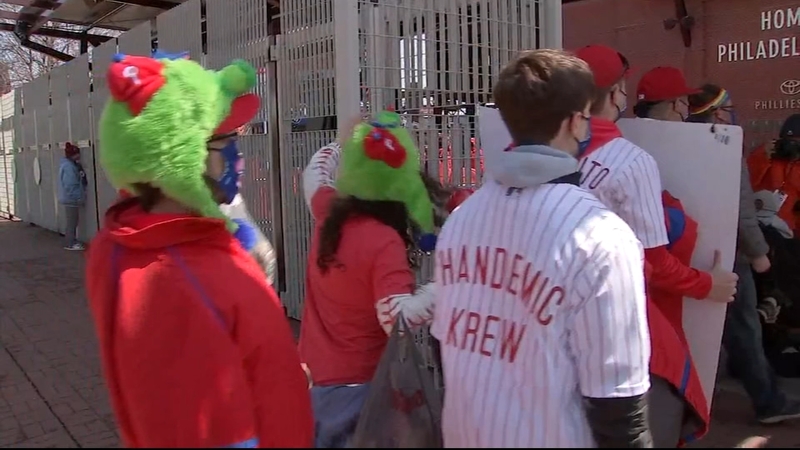 PHILADELPHIA (WPVI) -- Phillies fans broke out into cheers of joy on Thursday as they passed through the gates into Citizens Bank Park for the first time since 2019.

For opening day and the weeks ahead, the Phillies and the city came to an agreement that allows 8,800 fans into the stadium for now.

In addition, hundreds of employees are back to work.

The Phandemic Krew is leaving the ladders and horns at home as fans are allowed back into Citizens Bank Park - 8,800 of them.

The Phillies also put COVID-19 measures in place. People must wear masks, "clean teams" are disinfecting throughout the game, and there is socially distant seating in place.

All concessions are open and have an option of contactless payment. There are no bags allowed inside and no tailgating outside.

The group of die-hard fans who religiously watched every game last year from outside of the stadium were the first group to walk inside the park.

They dubbed themselves, the "Phandemic Krew."


Co-founders Brett MacMinn and Oscar Alvarado reflected upon the last year but said they are looking forward to starting a new season.

"Sixty games we sat out there last year. We've been to spring training. We love our Phillies and want to show all the positive love we can," said MacMinn.

"We had fun out there in 2020. That season is over and done with - the ladders are down and we're inside. We are going to bring that same energy we had outside the ballpark and bring it inside," said Alvarado.

Reid Ermigiotti watched with his father, Mark, and the "Phandemic Krew" last year. Mark Ermigiotti died in February from complications to COVID-19.

The "Krew" made sure Reid was there in person today by securing him a ticket. "It means a lot because it's kind of like continuing the legacy. It's what I usually do with him, so it's kind of cool that I get to go back and they're here for me too," said Reid, who lives in Doylestown.

Citizens Bank Park was filled with the cheers, the sounds of the clink of the bat hitting the ball, and the National Anthem playing again to a crowd, but it was also filled with gratitude.

"We're so grateful. It's been a long time since we've been to a baseball game so we put a lot of layers on, brought hand sanitizer," said Jackie Wong of Long Island, New York.