Opening Day: Here's everything you need to know before Phillies first pitch 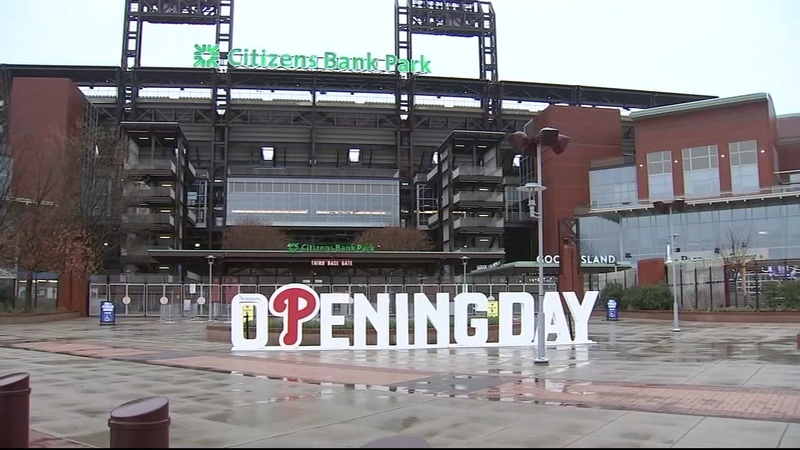 PHILADELPHIA (WPVI) -- Businesses in South Philadelphia are ready as fans, 8,800 to be exact, return to Citizens Bank Park for Opening Day for the first time since the COVID-19 pandemic began.

Corey Davis may have found his new best friend in the form of the Phillie Phanatic.

The Phillies are set to take on the Atlanta Braves at 3:05 p.m., and there's possibly no one who loves Opening Day more than Jennifer Stevenson.

Her routine for the last quarter-century is to hop in the car and drive down hours away from upstate New York.

"This will be my 26th year. Things are looking up and I think this gave us something to look forward to. When I pushed the button and got those tickets, it made my step lighter," said Stevenson.

SEE ALSO: Images of Phillies Opening Day from years past

At the Phillies team store inside The Bank, Business Manager Francis Winkey says his team is ready.

"It's a holiday, my favorite day of the year," said Winkey. "We have limited edition Opening Day pins that are only available here at the ballpark. Having the staff back, me being back is great, and having the fans come back is going to be greater."

The feeling is shared over at the brand new Live! Casino & Hotel Philadelphia.

"After the year we've had it's like a dream come true," said Senior VP of Marketing Mario Maesano.

He says they're prepared to be entertainment central at their Center Bar. And they have virtual blackjack and roulette tables protected by dividers with real dealers you can watch on camera.

Get a look inside Citizens Bank Park before Opening Day

But he expects the biggest crowds at their Sports and Social FanDuel Lounge.

"You can come have a great meal, watch a game on any of the screens we have around here. Also, you can go to FanDuel and place some sports bets," said Maesano.

Of course, the South Philadelphia restaurants are ready, like Chickie's & Pete's.

"It's a step in the right direction. It's a lot of positivity, a lot of good energy flowing through," said General Manager Sean McGranaghan.

With the rain Wednesday the tables outside were empty. But that's all expected to change before, during and after Opening Day.

"It makes me feel great like we are getting a little normalcy back. Being isolated and away from everybody, it's a breath of fresh air," said Sanniyyah Blackwell of West Philadelphia.

Safety at the stadium

Phillies fans should be expected to follow all the COVID-19 safety protocols in place at the ballpark.

The team said the following protocols were developed in conjunction with Major League Baseball, the City of Philadelphia, and the Commonwealth of Pennsylvania:

Mask-up Phillies fans! All attendees age two years and older must wear a face covering over their nose and mouth at all times on ballpark property, other than when actively eating or drinking at their ticketed seats.

To expedite entry, guests are prohibited from bringing bags and backpacks to the ballpark. Only single compartment purses, medical bags and diaper bags will be permitted. Approved bags can be no larger than 16" x 16" x 8" and will be subject to inspection upon entry in accordance with Major League Baseball security regulations. Guests may discard or return the prohibited items to their vehicle, as well as store them in a new BinBox locker on Citizens Bank Way ($10 fee).

All areas of the ballpark accessed by fans will be cleaned and disinfected before, during and after each game by a newly created "Clean Team" utilizing processes and products approved by the CDC and EPA specifically for use against COVID-19. Fans may also use hundreds of touchless hand sanitizing stations, which will be widely available at the ballpark.
The Phillies have enabled contactless and cashless payments across all points of sale locations, so guests can purchase concessions and merchandise using this safer cashless method.

It is important that fans practice social distancing of at least six feet inside and outside of Citizens Bank Park. Fans are asked to be aware of visual markers, as well as verbal cues from game day staff, throughout the ballpark to help maintain a safe environment.

As announced earlier, ticketing will now be 100% mobile through the MLB Ballpark App to create a more secure and safer entry for fans, with seating in assigned "pods." All fans should have their mobile ticket ready to scan when approaching the ballpark gate.

To decrease higher-traffic areas, each game ticket will now include the entrance gate that allows quick and easy access into the ballpark. Parking passes are also accessible through the MLB Ballpark App. Fans should also be aware that tailgating will not be permitted at this time.

Guest are encouraged to visit the Phillies website for the latest before visiting the ball park.

Outside Citizens Bank Park, dozens of local heroes on the frontlines of the COVID-19 pandemic will be honored with large banners.

The banners are typically reserved for Phillies players, but they now feature the faces of 41 local frontline heroes.

"They are unquestionably our celebrities," says Michael Harris, the vice president of marketing and new media for the Phillies.

"There has been a segment of our population that has truly gone above and beyond, from doctors to nurses, first responders, teachers, school bus drivers, kitchen aides, delivery drivers, volunteers, mail carriers, and so many more," added Harris.

Dozens of local frontline heroes are being honored by the Philadelphia Phillies for Opening Day.

The Phillies have finalized their Opening Day roster for the 2021 regular season. The roster includes eight former All-Stars (19 total All-Star Game appearances), two MVPs and one Rookie of the Year Award winner. 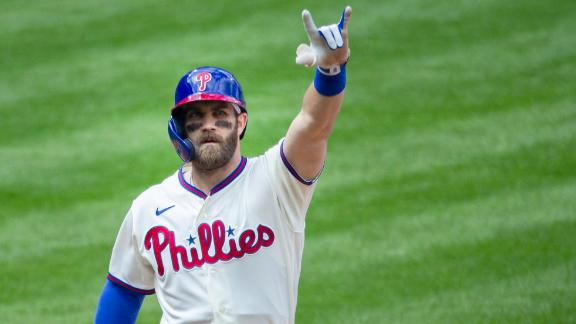 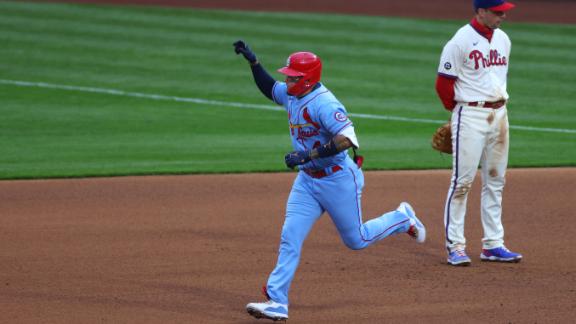