41 frontline heroes to be celebrated at Phillies Opening Day 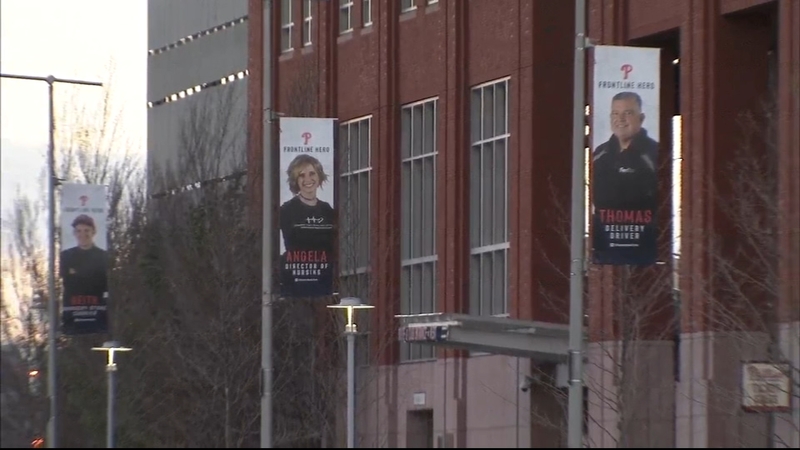 41 frontline heroes to be celebrated at Phillies Opening Day

PHILADELPHIA (WPVI) -- Dozens of local frontline heroes are being honored by the Philadelphia Phillies for Opening Day this week.

All around Citizens Bank Park, fans will see large banners with the faces and names of these heroes who really deserve to be in the spotlight.

The banners are typically reserved for Phillies players, but they now feature the faces of 41 local frontline heroes.

"They are unquestionably our celebrities," says Michael Harris, the vice president of marketing and new media for the Phillies.

"There has been a segment of our population that has truly gone above and beyond, from doctors to nurses, first responders, teachers, school bus drivers, kitchen aides, delivery drivers, volunteers, mail carriers, and so many more," added Harris.

On Opening Day this Thursday, the Phillies are inviting the heroes to see their faces proudly surrounding Citizens Bank Park and treating them to a celebration.

"I'm not even sure they know this yet, but they're going to be on the field and they'll get a chance to be in the spotlight in front of the fans in attendance," Harris says. "A few really lucky ones will also get to dance with the Phanatic during the game. And as the season progresses, several will be featured in a series of TV commercials, as well as videos on our YouTube channel."

Karen Metro from Huntingdon Valley is a school nurse at Saint Basil Academy in Jenkintown. They've had full-day in-person learning since September, and the school nominated Karen for guiding them through this pandemic.

"I was so honored and thrilled when I got the phone call that I had won," Metro says. "I couldn't believe it. I don't consider myself a hero. I'm not used to being the center of attention and taking credit for things that I do, but it's so exciting."

Barry Gould from Langhorne is the director of the supply chain and clinical engineering at St. Francis Medical Center in Trenton. He is in charge of getting PPE and other medical necessities to keep the staff safe.

He's giddy thinking about seeing his banner on Thursday.

"I think it'll be ecstatic," Gould says. "I won't be able to get the smile off my face."