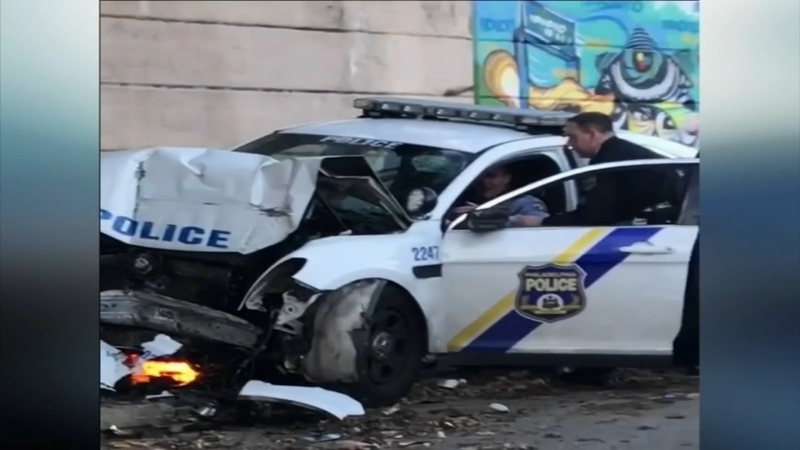 NORTH PHILADELPHIA (WPVI) -- A bystander was recording video shortly after a Philadelphia police officer was seriously injured in a crash on Thursday, and was still recording as the officer was pulled from the cruiser as it burst into flames.

Alex Ruffin said he heard the impact and rushed out to help after the police car collided with a bridge support.

Several police officers were already on scene, you can see 31-year-old Officer Matthew Smyth is still stuck in his car.

The car would explode seconds later.

"We run up the street you just see smoke and lights and everything," said Ruffin.

He says he tried to help, and Smyth repeatedly asked for something to drink.

"He was semi-conscious. He was doing a lot of moaning. He had a gash in his head he was asking people for a cup of water, a bottle of water," added Ruffin.

But once he saw the cruiser ignite he just wanted to make sure Smyth got out.

But they do say before the crash Smyth heard gunfire.

Philadelphia Police Captain Sekou Kinebrew said, "He heard gunshots and was trying to get to the location to where he thought the shots were coming from."

The good news is, we spoke with his parents outside of Temple University Hospital Thursday night and they say he's expected to make a full recovery despite extensive injuries from the impact.
EMBED More News Videos

"He does have a fracture of the cervical spine but here's no paralysis which is great. There is a hip fracture, minor that they're still dealing with and the significant head gash," said Nancy Smyth, Matthew's mother.

He is still in the hospital and even in good spirits.