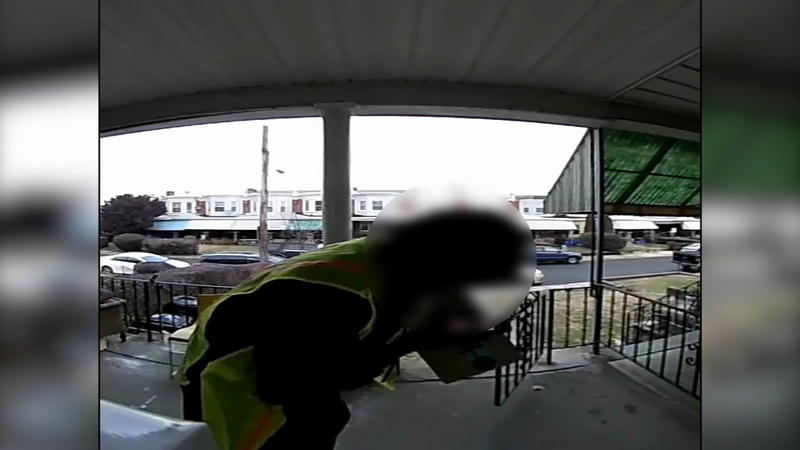 WEST PHILADELPHIA (WPVI) -- The search continues for a man who was caught on camera stealing an Amazon package from a West Philadelphia home.

It was just after 3 p.m. Friday when Marlon Jarvis got the updates to his Amazon account.

The first was a picture of the items he ordered placed neatly on his porch.

The second was an update that the battery pack and iPad he bought were delivered.

But when he came home from work later that day, he was stunned.

"You can see a box cutter went through there real quick, like he was in a rush," Jarvis said as he showed us the opened box.

So he went back and looked through his doorbell surveillance video.

The video shows a man dressed as a delivery driver that appears to be completing an Amazon delivery for Jarvis on North Simpson Street.

The man then leaves.

But minutes later, he walks back, reaches down, picks up a package, runs back to his truck, and drives off.

The new battery pack and iPad case were gone.

"I feel bad, you know, cause I work hard every day, just like everyone else," Jarvis said.

Jarvis is adamant the last person recorded on his porch until he got home was the person dressed as a delivery driver.

On Monday, he began working with the police to figure out what happened.

And he has a message for whoever stole his stuff.

"You're going to get caught. I want you to be apprehended cause you can't be doing that to people working hard with hard earned money, and then you go and steal," Jarvis said.

Jarvis says he has filed a police report.

Action News reached out to Amazon. The company says it's looking into this situation.

At this point, it's not known if the man in the video is actually employed by Amazon.