President Trump speaks to contractors in Philadelphia amid protests 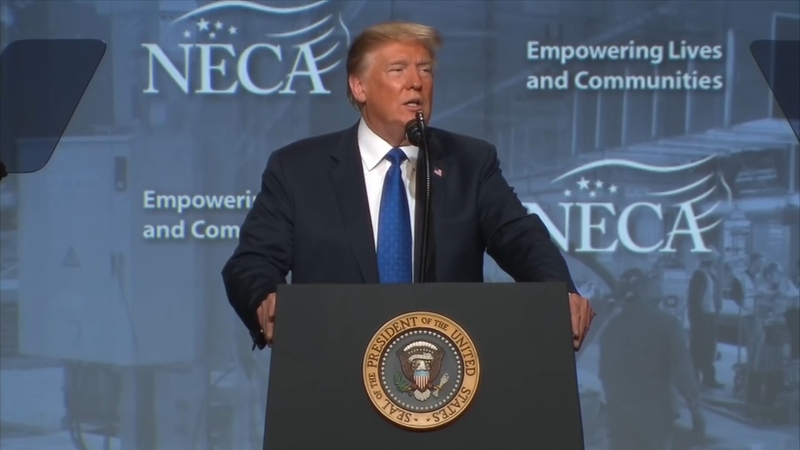 In Philadelphia, Trump boasts to contractors of economic revival

PHILADELPHIA (WPVI) -- President Donald Trump told electrical contractors Tuesday that his economic policies would translate into more jobs for their ranks as he highlighted a new trade deal among the U.S., Mexico and Canada.

"We're in the midst of a manufacturing renaissance - something which nobody thought you'd hear," Trump said in a speech to the National Electrical Contractors Association Convention in Philadelphia, a day after celebrating the new North American trade deal.

In fact, North America already is a manufacturing powerhouse. The United States ranks No. 2 in the world behind China in manufacturing output. Mexico ranks 11th and Canada 13th, according to United Nations numbers pulled together by the Brookings Institution.

Trump calls the new trade agreement USMCA, for U.S.-Mexico-Canada Agreement. "Like YMCA or U.S. Marine Corps with an A at the end," he explained.

He said he doesn't want to use the previous name, NAFTA, the North American Free Trade Agreement, which he contends cost American jobs and railed against during his 2016 presidential campaign. The new trade deal still must be approved by Congress.

"We are finally rebuilding our country, and we are doing it with American aluminum, American steel and with our great electrical contractors," he said.

Trump's appearance was met with protests outside the Convention Center. Protesters chanted and held signs reading "Trump is not welcome here" and "Stop Kavanaugh," referring to the president's pick for the Supreme Court.

"Judges matter, and in some ways it matters more to the day-to-day lives of normal people than anybody else. And this is truly a threat to everybody's daily life," said David Applebaum.

"If the Supreme Court nominee gets on the court we are in severe danger of tipping into a place where America can't come back from," said Mary Tuomanen.

Protesters marched up Arch Street to the Parkway and around City Hall. They blocked traffic outside the Convention Center on North Broad Street, airing concerns about immigration policy, healthcare and women's rights.

"I've been fighting for human rights since the late 1960s I thought we were making progress, but it seems like we're taking steps backwards now," said Cynthia Berger.

President Trump arrives in Philadelphia ahead of a speech at the Pa. Convention Center on October 2, 2018.