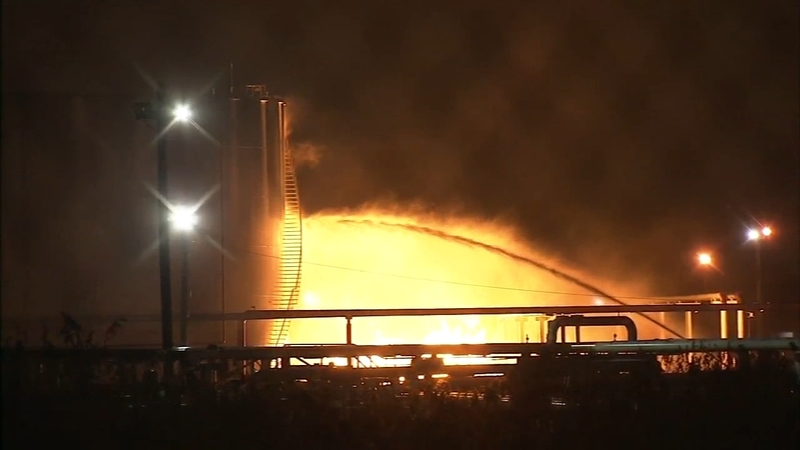 PHILADELPHIA (WPVI) -- Firefighters jumped into action when an industrial facility went up in flames in Southwest Philadelphia on Monday night. They performed a high-risk move, shutting off a valve within feet of the flames.
It happened around 6:45 p.m. at the Point Breeze Terminal located along the 6300 block of Passyunk Avenue.

Fire crews responded to a report of a fire showing from an area between two ethanol storage tanks. The fire reached two alarms with the flames burning at approximately 1,000 degrees

The company said after the fire broke out, the facility was immediately shut down and all personnel was evacuated.

"The appropriate regulatory agencies are being notified, and an investigation into the cause of the fire will be conducted," said Kinder Morgan in a statement.

Fire officials made the decision to send teams in to shut off the valves, cutting off the supply of ethanol to the flames.

Philadelphia Fire Commissioner Adam Thiel said the firefight was extremely dangerous and the entire 1.5 million gallons of ethanol could have caught fire at any moment.

"We determined, of course, the best way to eliminate the longer-term risk was to put that fire out. And again, not by putting it out, we actually had to close the valves first to stop the product, then extinguish the fire and now the cleanup begins-- led by Kinder Morgan and their contractors," said Thiel.

Officials said they don't know how much ethanol was released, but do say it was all contained to the area adjacent to the tank and they were conducting air monitoring at the perimeter of the facility.

At approximately 7:00 p.m. Eastern Time yesterday, Kinder Morgan discovered a fire, which was isolated to a cargo pump adjacent to an ethanol tank located in its Point Breeze Terminal in Philadelphia, Pennsylvania. The fire was extinguished last night and Kinder Morgan's emergency response team remains on site. Ethanol (a form of corn based alcohol used in vehicle fuel) was released from the impacted tank and is contained within the tank's dike wall at the facility. The facility was evacuated and all personnel are accounted for, with no injuries.

At this time, air monitoring is being conducted and is reporting that there continue to be no offsite impacts. Air quality monitoring at the facility perimeter during the fire showed no air quality threat to the public during the incident. Cleanup activities are underway and Kinder Morgan is recovering and removing the product from the impacted area. The facility is shut down, and repair and remediation plans are being developed. Local emergency responders remain on site and the streets surrounding the facility are now open.

Kinder Morgan wishes to thank the Philadelphia firefighters for their quick and capable response.