City of Philadelphia to allow catered indoor events, increase restaurant and gathering capacity in May 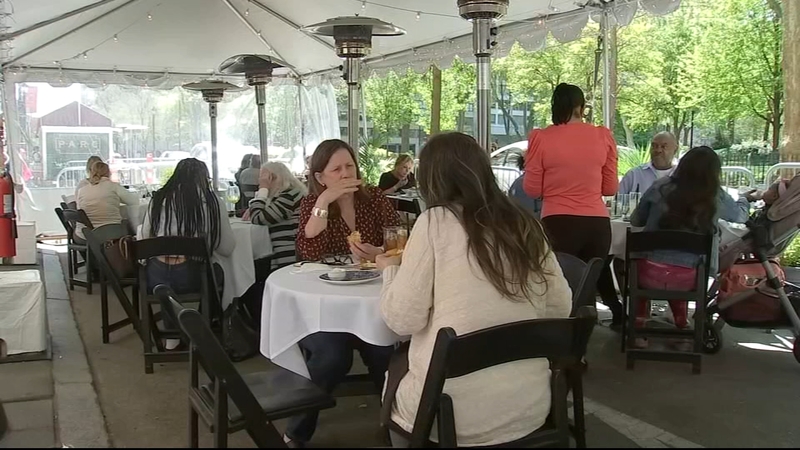 PHILADELPHIA (WPVI) -- Philadelphia officials announced on Tuesday that indoor catered events - including weddings - will soon be allowed, and capacity limits will be increased for restaurants and gatherings in the city.

The following will go into effect on May 7:

-All restaurants will be allowed 50% capacity

-Must maintain six feet of distance "chairback to chairback."

-Table size can increase to 10 people

-Venues allowed 25% occupancy of the space

-Cap of no more than 75 people including staff

-If case rates continue to fall, the limit will increase to 150 people including staff on May 21.

OTHER GATHERINGS AND EVENTS

-Will be in line with Pennsylvania standards

We found some people who were happy to hear the news.

"Totally thrilled, because we're in the suburbs so we've had it relaxed a little bit sooner than that, and always coming into Philly and having the restrictions has been - it's just been hard," said Lee Seaman of Swarthmore.

Seaman says with prom season right around the corner the timing couldn't be better.

"I happen to be planning a prom right now," she said. "You shouldn't take that stuff away from people, and I'm hoping all the people who got married in the past get to have those celebrations."

Farley said the loosening of these restrictions is coming as more people are getting vaccinated.

"A strong recommendation: anyone participating in these higher risk or higher density events should be vaccinated first," he said. "The reason is that there are still plenty of people in Philadelphia carrying this virus."
Report a correction or typo
Related topics:
health & fitnessphiladelphiacoronaviruscovid 19 vaccinecovid 19
Copyright © 2022 WPVI-TV. All Rights Reserved.
TOP STORIES
Boy, 11, suffers burns during bonfire explosion
Relief coming for residents enduring deafening steam plant noise
Son of Philly police officer shot, killed during apparent robbery
Another volatile day on Wall Street. Is it time to worry?
AccuWeather: Back to the 40s Tuesday
Officials ID victim killed in Montco crash; 4 others seriously injured
Mayor Kenney to undergo heart procedure Tuesday
Show More
Getting paid on Venmo or Cash App? New tax rule might apply to you
Philly sees more graffiti during COVID, but artists say it's an outlet
Tax season officially begins. Here's everything you should know
Introducing Millville, New Jersey's first female mayor
Dad charged and fired from job after racist tirade posted on TikTok
More TOP STORIES News