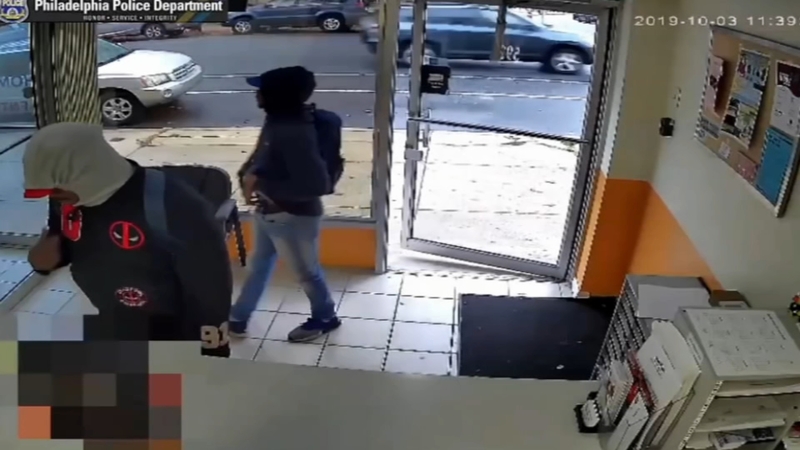 PHILADELPHIA (WPVI) -- Philadelphia police are asking for the public's help to track down several suspects after a violent robbery that saw several employees tied up with duct tape.

Police say two of the suspects were armed with semi-automatic handguns.

Action News spoke to some of the workers terrorized by the gunmen. One of them was too afraid to show his face but those we talked to say, they thought they were going to die.

"I didn't have a chance. They just pointed a gun at my head and said 'don't move,'" said one employee who didn't want to be identified.

"When it happened I didn't scream, but when I go home and think about it and it's scary. I had a hard time sleeping yesterday," said employee Tien Tien.

The video shows the gun-toting crooks force employees to the floor and tie them up with duct tape. Within seconds, they got away with two iPhones and thousands of dollars.

Employees believe the thieves were familiar with the business.

"They don't say nothing. They just know exactly what to do. The money was right there, the envelope was there and everything. So they took everything," said the unidentified employee.

The victims eventually freed themselves and one of them chased after the suspects.

Police say one of the criminals fired at least one shot but no one was injured.

People from nearby businesses watched the surveillance video in disbelief and say they had no idea the crime was taking place.

"It's scary, it's very scary but like I said at Salon Blue, we keep our customers safe. We have an alarm, we have a buzzer for the door and you can't come in without us letting you in," said Rhonda Bowie with Salon Bleu.

"If you don't have appointment with us you are not coming in, I am sorry you have to set up an appointment," said Pavi Pinset with Warner-Newman Law Group.