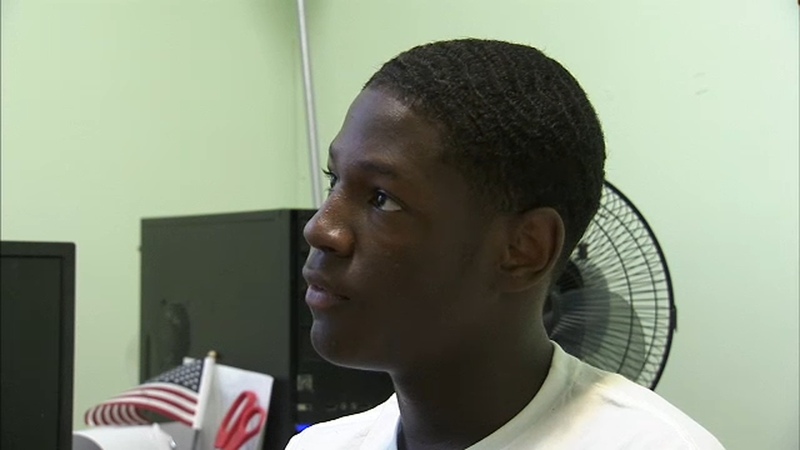 PHILADELPHIA (WPVI) -- "I didn't know what to think, I was in shock because I didn't know I was shot," said Dajuan Williams

The 14-year-old was standing outside the Gratz-Imhotep football game, waiting to get in, when he found himself running for his life.

A bullet went in, then out of his foot. Police say he was one of two teens injured.

"It was like a sting, and I started feeling it more and more," he said. "When I looked at my sock, my sock had a hole in it."

Hours earlier, Dajuan had been with his dad at a "stop the violence rally" at City Hall, taking a stand against the very violence he would later become a victim to.

"Not even an hour-and-a-half later my son is shot, standing at a football game, running away from gunshots," said Dawan Williams

Police say neither Dajuan nor the other teen were the intended targets.

Monday night was a chance for his friends from the New Options More Opportunities program -- who attended Friday's game with him-- to see that Dajuan was okay.

"Seeing him walk through the door I feel better," said one peer tearfully.

"Mostly every kid that spoke today shed a tear, and a lot of them that spoke thought about retaliation," said Ricky Duncan, with New Options More Opportunities.

"They needed to hear little Dajuan tell them, 'Do not retaliate in my name. 'I'm ok.'"

As for Dajuan, he says Friday's incident is making him question his safety.