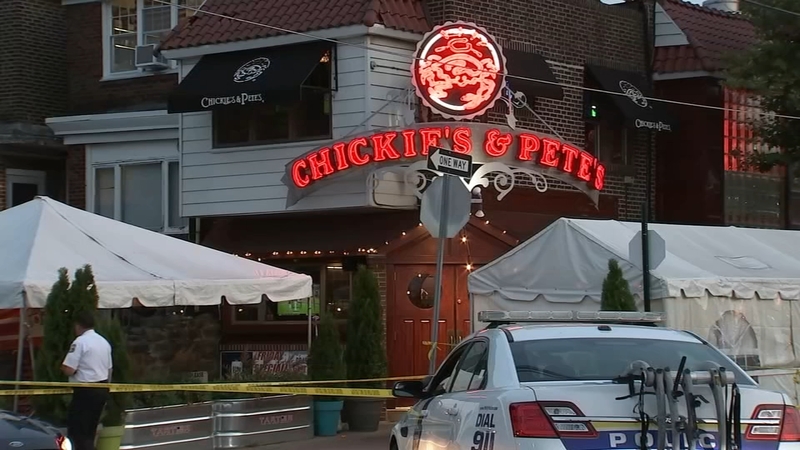 PHILADELPHIA (WPVI) -- Philadelphia police say one man was injured after an altercation inside Chickie's & Pete's led to a gun battle outside of the restaurant on Thursday night.

It happened just before 8 p.m. on the 6200 block of Mulberry Street in the city's Mayfair section.

The shootout began when three men inside the bar made a comment to a woman passing by. She then told her boyfriend who was dining outdoors.

Police say the boyfriend, who had a license to carry, went back into the business to flash his gun. The altercation spilled out onto the street and a gun battle ensued.

Philadelphia police are searching for a gunman who shot a man outside Chickie's & Pete's.

The woman's boyfriend, a 23-year-old man, was shot in the abdomen. He was rushed to an area hospital where he's listed in critical but stable condition. No other injuries were reported.

Roughly 20 people were inside the restaurant when the gunfire erupted outdoors.

"We were having dinner when we heard the gunshots," said Ann Marie White of Tacony.

One man is in critical but stable condition after a shootout outside @ChickiesnPetes in Mayfair. Argument inside spilled out onto the street. No arrests have been made. @6abc pic.twitter.com/UUCaTG0JQm

Chopper 6 was overhead as officers cordoned off the area. Police say eight shell casings were recovered at the scene.

No arrests have been made. Police are looking for three suspects who may be driving in a white Nissan Maxima.