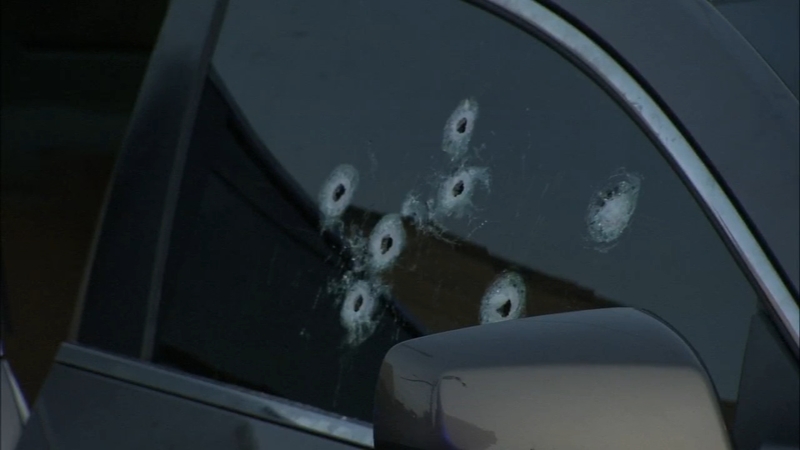 PHILADELPHIA (WPVI) -- A shooting, a police chase and a crash ended with four people taken to Temple University Hospital, including two police officers.

It happened around 7 p.m. on North Broad Street and West Glenwood Avenue.

Police say two officers assigned to the 22nd District were traveling on North Broad Street with their lights and sirens on after they observed a black Dodge leaving the scene of a shooting with the victim inside the car.

Police say the shooting happened at North 15th Street and Lehigh Avenue in North Philadelphia. Witnesses who spoke with Action News said they heard the gunshots.

"I was shocked," said Emma Andrews. "We actually ducked behind cars."

Cellphone video shot by Andrews showed seven bullet holes in the passenger window of the Buick. Police said a driver shot at a car at 15th and Lehigh in North Philadelphia with a 19-year-old man inside and then drove away south on 15th Street.

"I was standing on the corner, and at first I thought it was firecrackers, and then by the time I heard the third one I said 'Oh no, somebody's shooting.'"

The man inside the car suffered at least three shots to his leg. Cellphone video shows a crowd gathering to help, and police said a man in a black Dodge took the victim in his car and started driving him to Temple University Hospital.

That's when police say a man driving a gray Kia allegedly crashed into the police vehicle.

The officers and the driver were taken to Temple University Hospital where they're in stable condition. The officers were transported for minor injuries.

"This is crazy, I think it's just too much at one time," said Andrews.

Montana Levels said he owns the business right in front of the shooting scene and said he planned on staying open until midnight but had to close his business early because of the shooting.

"Definitely going to affect the business, but it's only money, you can't bring back someone's life, and that's what's most important," said Levels, the property owner of Water Ice Wholesale and Retail.