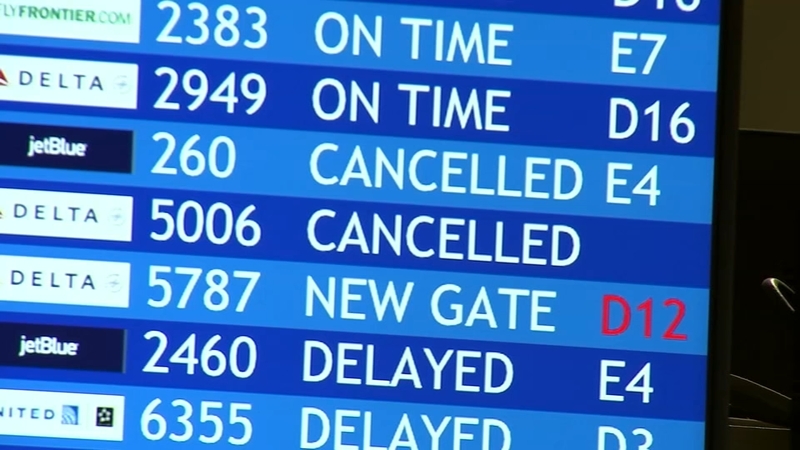 PHILADELPHIA (WPVI) -- Though Friday morning's winter storm has cleared, Philadelphia International Airport officials said they're working to clear tarmacs as quickly as possible as airlines try to get back on track.

As of noon, the airport reported 100 canceled flights and 52 delayed flights in and out of Philadelphia.

"Bad weather across the country has been a major issue," Heather Redfern, PHL spokesperson, said.

It's a domino effect causing major headaches for some passengers, while leaving others on edge about the unknown.

🚘 It’s going to be a slow morning commute across the #Philadelphia region. @6abcWeather says the system should clear out around 8 a.m.

Marisa Behrend of Cherry Hill, New Jersey was really excited to be at the airport, but was also extremely nervous about her flight's status.

Behrend was taking a flight overseas to study abroad; she was just hoping for no weather delays or cancellations.

"If one flight gets delayed then I'm going to miss the other ones, probably, and it's just not going to be fun," Behrend said.

Many passengers told Action News they were surprised that they didn't run into any issues.

"Everything was pretty much good. I got my last-minute flight and I got here," Jhaneesah Winbush of Norristown, Pa. said.

Redfern said the work that airport crews were putting in Friday afternoon will help with efforts to stay on track this weekend.

"We need to keep the runways and the taxiways open for the planes and clear what fell and stuck overnight to keep that moving and keep it out so we don't have areas that freeze up that prevent planes from landing or taking off," Redfern said.

American Airlines, PHL's largest provider, said it canceled at least 39 out of 225 departures at the airport Friday.

"The vast majority of impacted flights were precanceled yesterday so we could proactively notify and accommodate our customers and avoid last-minute disruptions at the airport," American Airlines said in a statement to Action News.

The American Airlines spokesperson also said customers impacted by the storm are allowed to rebook without charge.

The Philadelphia Streets Department and PennDOT got a jumpstart with putting down brine on major roads and interstates before the snow rolled in.

We're told the Streets Department focused on salting primary and secondary roads and some of the streets in the higher elevations of the city, such as far Northeast and far Northwest.

The heaviest snow is coming down now. Here's a look from the @6abc balcony ❄ pic.twitter.com/vhmmmh7ENj

The view from Chopper 6 Thursday night captured PennDOT crews hard at work, brining the highways across the region before the snow moved in.

"Snow could be falling at a pretty good clip tomorrow, maybe an inch an hour," said Brad Rudolph, a spokesperson for PennDOT.