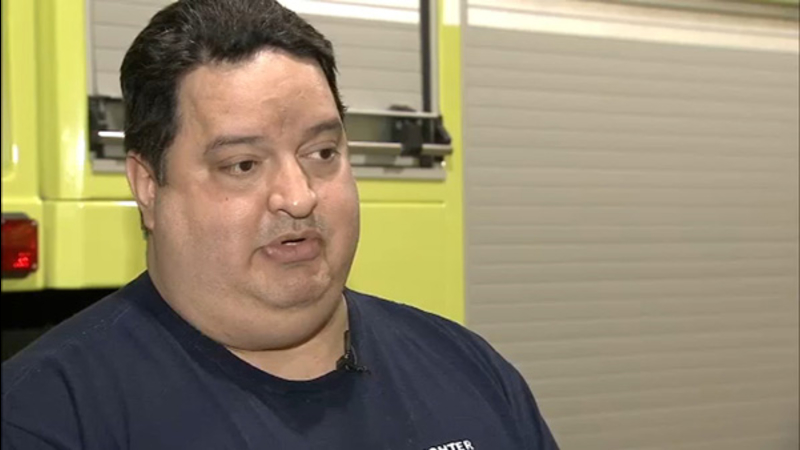 PHILADELPHIA (WPVI) -- Firefighter Angel Torres braced on the tarmac with Engine 78 as Southwest Flight 1380 barreled towards the runway at 190 miles per hour.

"The call comes in, me and my lieutenant get into what we call Foxtrot 9. Upon the plane landing, we notice heavy damage to the left wing," Torres said.

He was among the first responders to first board the battered aircraft.

"When we arrived, there was one EMT and a nurse supplying CPR, after that, we started doing CPR for them," Torres said.

Forty-three-year-old Jennifer Riordan was sitting in the window seat of row 14. She died of blunt force trauma to her head and neck, after being partially sucked from the plane. Torres said the passengers tried to save their best to save Riordan's life.

After the Boeing 737 was grounded, the 144 passengers and five crew members were evacuated.

Lt. Daniel Morgan of Engine 78 remembers the looks on the faces when he entered the plane.

"Some were upset, some were quiet, others were crying, some you could see were physically shaken," Morgan said.

The first responders got an up close look at the severity of the damage.

"The front part of the engine was missing, the cowls around it were all missing, you could see the blades, they were exposed," Morgan said.

Engine 78 Captain Kevin O'Mally says the responders knew action had to be taken because of a fuel leak.

"We stretched hose line and put foam under the wing in case something would ignite," O'Mally said.

Philadelphia Fire Deputy Commissioner Gary Loesch says the crews are ready to face whatever comes their way and to help those in need.

"The incidents are few and far in between here, thankfully, but every time we go out, we have to be prepared for anything that could possibly be happening," Loesch said.

For Angel Torres, who has only been at Engine 78 for a few months, he continues to reflect on the life lost in this tragedy.

"Anytime you lose someone like that and you tried your best, it's hard," Torres said.