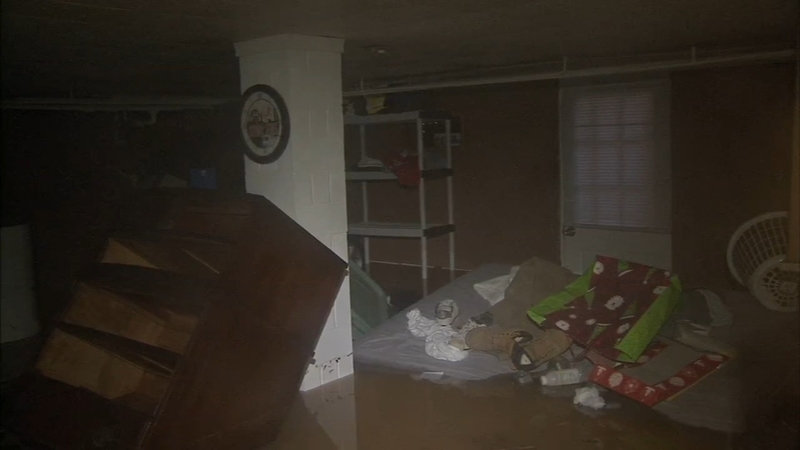 FOX CHASE (WPVI) -- Twenty-five homes are without water and some are dealing with flooded basements after a water main broke in the Fox Chase section of Philadelphia on New Year's Eve.

The 8-inch main ruptured around 8 a.m. Sunday on the 900 block of Strahle Street near Verree Road.

The Flores family found themselves abruptly ending their plans to ring in 2018 and packing up to head to their daughter's home after the broken main flooded their basement with 4.5 feet of water.

"This is the second time around with the city, with the water department. They keep on doing the same thing over and over again. Nobody gives a hoot about nobody," Mr. Flores said.

Crews with the fire and water departments descended upon the block which became a sheet of ice as the water receded revealing brown water marks along driveways and cars. There were also trails of mud along sidewalks and yards.

"This morning we came out and it was just gushing out of the ground," resident Jeffrey Kernaghan said.

Hoses later pumped water out of homes and back on to the street adding a new layer of ice.

Neighbors say they called the water department on Thursday and Friday after noticing a leak.

"A couple of days ago my dad called it in, there was a little bit of water down running down the street," Kernaghan said.

"Unfortunately, the water department is very, very busy. We have several water main breaks happening every day. We're going out where customers are calling for leaks in the streets, and service lines are broken, as well. We don't turn every water main off that is broken or could be broken because if we did do that, we'd be turning off a lot of homes," DiGiulio said.

It will take several hours for the water to be restored at the affected homes.