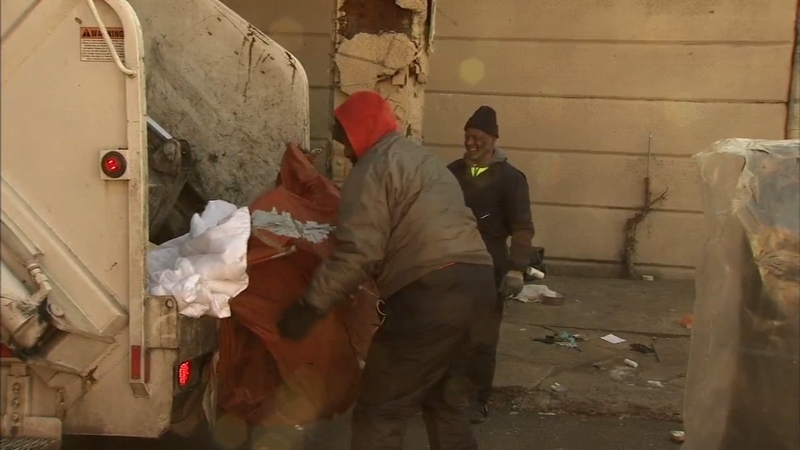 KENSINGTON (WPVI) -- City officials were back at a homeless encampment in the Kensington section of Philadelphia on Thursday, finishing a month-long cleanup effort just as brutal cold descended on the area.

The encampment on Emerald Street has been the focus of a 30-day cleanup initiative. On Thursday morning, homeless outreach workers, police and cleanup crews moved those living there and threw out what was left behind.

The encampment is the last of four that the city has removed in the Kensington area plagued with drugs.

At a news conference, city leaders announced what they're calling encouraging statistics from outreach work done at the previous encampments.

"Today, 44 percent of those on our by-name list from the Kensington and Tulip encampments are housed or in treatment," said Director of Philadelphia Homeless Services Liz Hersh.

The police department vows this is the end of the encampments.

"We will be deployed very heavily in the Harrowgate area to make sure the actions that we took today won't have any negative impacts in the community, and we'll be there to deal with them if they do," said Deputy Commissioner Joe Sullivan.

But it's bittersweet for those who know the struggle homeless face better than anyone.

Dante Jones used to live there.

"Hopefully this will inspire a lot of people to look at some of the other options the city offers, whether it be shelters or housing," said Jones.

Officials say the majority of people from Emerald Street went into shelters or treatment.

In order to make that happen again for the last 30 days outreach workers have been coming to the site and building trust.