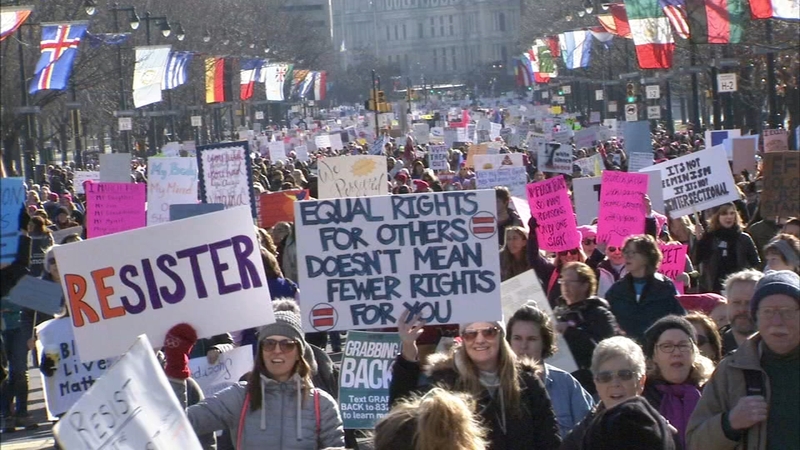 PHILADELPHIA (WPVI) -- Thousands of activists gathered in Philadelphia for the second year of marches in support of women's rights.

Saturday's march is among dozens of rallies being held around the country. The activists are hoping to create an enduring political movement that will elect more women to government office.

Many marchers wore pink cat-ear hats as a show of solidarity, while others carried signs stating opposition to President Donald Trump and his policies.

The rallies come a year after women rallied in cities across the Northwest and the United States, many saying they hoped to send a message to Trump about equality and other causes.

Afterward, a wave of women decided to run for elected office and the #MeToo movement against sexual misconduct became a cultural phenomenon.

Today, they marched down the Ben Franklin Parkway, their messages were written on signs and on musical instruments.

There were even 3-D creations - like a basket of Deplorables.

Demonstrator Patty Shuminski said, "I tried to do a poster but I couldn't fit every thought on a poster, there's too many. So I decided to just go with the characters that are now running our government."

The march drew people concerned about many issues.

Lou Ann Merkle of Plymouth Meeting said, "The concept that they don't believe there's climate change when there actually is."

Organizers say the focus of this year's march is the upcoming elections.

Emily Cooper Morse, Philly Women's March Lead Organizer said, "We really want people to get out and vote. We have people here that are able to register people to vote today and we really want to get people ready for the primaries in May and the midterms in November."

The march ended with a rally in front of the Philadelphia Museum of Art.

But the demonstrators were not all women.

Kyle Park of Morrisville, Pa. wanted to come up here to support his mommy, his grandmommy, his aunts and everybody else.

And the signs were not all political. Kyle's sign read "resists naps."

He's not napping for us too well right now. That's the only thing he really understands.

After the deadly shootings there last year, they say Nevada will be a battleground state for the Senate in the 2018 elections.