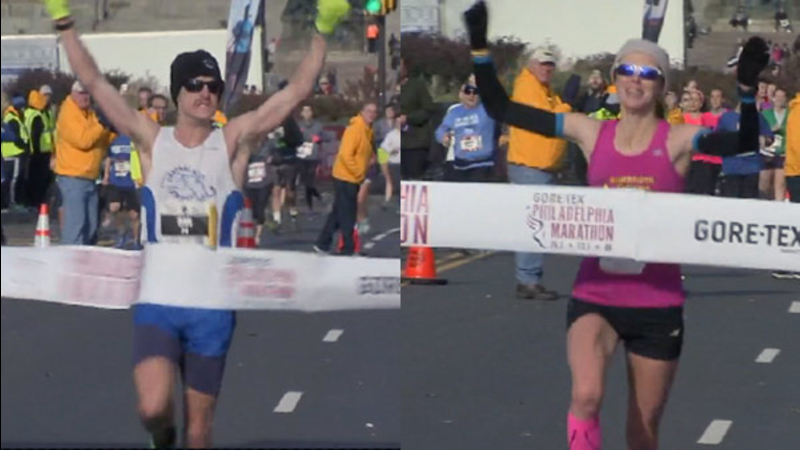 PHILADELPHIA (WPVI) -- The winners of the Philadelphia Marathon have crossed the finish line.

29-year-old Dan Vassallo of Peabody, Massachusetts is the male winner. He also won the race in 2010.

He also finished fast enough to qualify for the 2016 U.S. Olympic trials. To do that, Vassallo had to run faster than 2:18.

"It's amazingly exciting. I didn't come out here for the goal specifically of winning; if I knew it was in reach I was going to go for it. My goal was to qualify for the US trials, I'm happen that happened and I'm happy winning the thing is a byproduct of it," Vassallo said.

Leonora Patrina, who's originally from New Zealand, but now lives in Bayport, New York, was the fastest female finisher with an unofficial time of 2:39:58.

This was her first marathon.

"This is my first one so I didn't want to go too hard...It's pretty cool. I didn't expect to win. I was hoping for a top five, but to win is awesome," Petrina said.

The 30,000 runners took off at 7:00 a.m. making their way along the Schuylkill River, through Fairmount Park, University City and Manayunk before ending back on the Ben Franklin Parkway.

It is one of the city's premiere events, drawing runners from every state and dozens of countries. 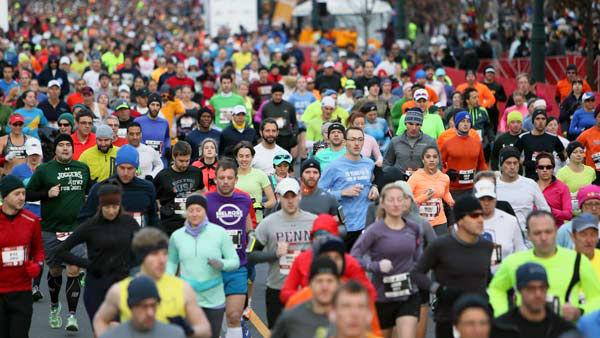 Andrea and Darren Rathbone came down from a suburb of Boston, Massachusetts to run the marathon.

They had nothing but nice things to say about their fellow runners and the people cheering them on.

"They're awesome. You read the signs when you're running, gives us a laugh, and gives us the edge to finish," Darren said.

Security was tight this year, as it was last year.

"Last year, we were definitely nervous because of what happened in Boston, but Philly did a great job and continued to do a great job this year from our perspective," Andrea said.

Several major roads and SEPTA routes are affected by the marathon and half marathon.