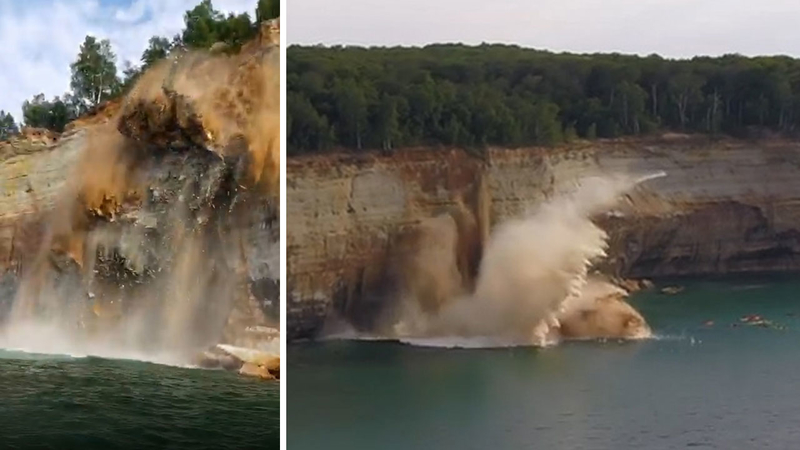 MUNISING, Mich. -- Kayakers on a tour of Pictured Rocks National Lakeshore in northern Michigan narrowly escaped injury when a large section of cliff collapsed near them into Lake Superior.

The kayakers were in an area where sandstone cliffs stand up to about 200 feet above the water, according to local media reports.

Van Ouellette-Ballas of Northern Waters Adventures, one of the guides, said smaller rocks had fallen near the group of 18 kayakers Monday before the massive section fell. He told WLUC they "thought we were at a safe distance" and were paddling away when the large collapse missed them by about 50 feet.

Footage shot by one of the kayakers showed members of the party screaming as the cliff began to collapse, producing a thunderous boom as debris hit the water.

Nature photographers Jon Smithers and Craig Blacklock were on a boat not far away at the time of the collapse, and Smithers turned a drone toward the sounds of the collapse in time to record video of it. The group of kayakers could be seen paddling away from the cliff as debris falls into the water, turning it brown.

Smithers told WLUC the rock fell so far out into the water that he was initially afraid kayakers had been hit by falling debris.