Viral challenge: Would you take a pie for PANS? 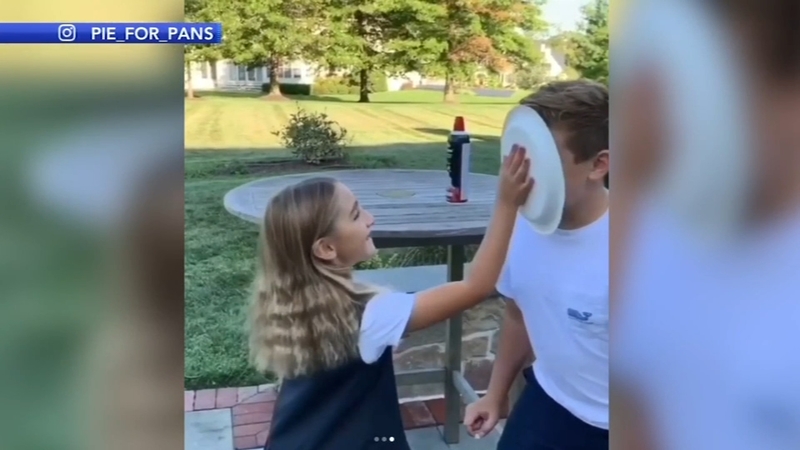 "You just take a paper plate with whipped cream on it, smack it in your face," laughed 13-year-old Will Esterhai.

Esterhai, of Newtown Square, and 12-year-old Kiley Schmitt of Coatesville, launched the social media challenge 'Pie for PANS' after their own struggles with a disorder known as PANS and its subset, PANDAS.

The challenge involves taking a pie to the face, making a donation to http://PANDASNETWORK.ORG, and raising awareness and research funding. Don't forget to hashtag your video #pieforpans.

The Pie for PANS challenge has raised $45,000 and counting.

The pair hopes it will catch on, like the ALS Ice Bucket Challenge a few years ago.

"I oftentimes have a hard time, like, getting out of bed in the morning. Just because I'm so anxious," described Esterhai, who has been diagnosed with PANDAS.

"I had a lot of sensory and rage, and I was very agitated, very quickly," explained Schmitt, diagnosed with PANS.

PANS is the acronym for Pediatric Acute-onset Neuropsychiatric Syndrome. According to the Stanford PANS Program, "the cause of PANS is unknown in most cases but is thought to be triggered by infections, metabolic disturbances, and other inflammatory reactions."

PANDAS, short for Pediatric Autoimmune Neuropsychiatric Disorders Associated with Streptococcal Infections, is a subgroup of PANS, and is believed to occur when strep triggers a misdirected immune response attacking the child's brain.

While institutions like Stanford and Mass General have doctors who research and treat PANS/PANDAS, they are not universally accepted diagnoses and often not covered by insurance.

"A doctor before told us to get off the internet and stop searching stuff," Kiley remembered.

Kiley's sensory issues began when she was two or three years old but seemed to peak last January when she couldn't stand the feel of clothing on her body.

Her mother, Dawn Schmitt, added, "It was a struggle when your daughter's begging to get help, and she just wanted us to help fix that, and we couldn't."

The first sign of PANDAS for Will was an eye tic at 4-years-old.

"It's also hard to prove- there's no test. You can't just give a child a test and say, 'oh look sorry it looks like you have PANDAS, let's go this route with it'," added Will's father, Greg Esterhai.

"He said, 'Give her high dose ibuprofen for five days,' and we knew by day-three she was already amazing," Dawn said.

She continued, "Her one teacher said, 'it's like I'm teaching a new child.'"

Will was also recently diagnosed by a specialist and has seen progress.

"Within a week of antibiotics, most of the symptoms went away," Will told 6abc.

Will says he also has learned strategies to use when symptoms flare up.

Both are relieved to feel the difference, but they do still have their struggles and they want to help others.

"These kids are so brave to do this and speak to help other children," said Dawn.

The community has rallied behind the cause, including Will's dance studio Twirl, in Newtown Square.

Owner Sam Sinns happily took a pie to the face on Instagram.

But he wanted to up the ante. Sinns vowed to shave his head live on social media if the studio raised more than $1000 and posted 20 videos.

Twirl families more than doubled that dollar amount, and Sinns is a man of his word.

Sinns dyed his hair green to match the Pie for PANS logo.

He fired up live feeds on social media pages last Friday, and let some of his students take a swipe.

No hair, no problem, said Sinns, who explained, "These are our world-changers right here, and if we can support a 13-year-old in an initiative he's doing now, I mean he's going to carry this with him when he goes to his next battle, his next challenge."
Report a correction or typo
Related topics:
societycoatesvillesocietyviral
Copyright © 2022 WPVI-TV. All Rights Reserved.
TOP STORIES
Grandmother of 5 returning home from work killed in hit-and-run
South Philly steam plant operators explain noise frustrating neighbors
2 dead after shooting inside Delaware restaurant: Police
5 tax changes that can boost your refund this year
Several wounded in shooting in German city; gunman dead
Andy Reid's Chiefs wins in OT after wild 2 minutes, coin toss
Temple students can no longer only wear cloth masks starting today
Show More
1 dead, 2 injured after convenience store shootings
Local Ukrainian community reacts to threat of war in country
Woman finds $3M lottery prize in her spam folder
Parrot forms special bonds at Montco senior living facility
AccuWeather: Seasonably Chilly Monday
More TOP STORIES News