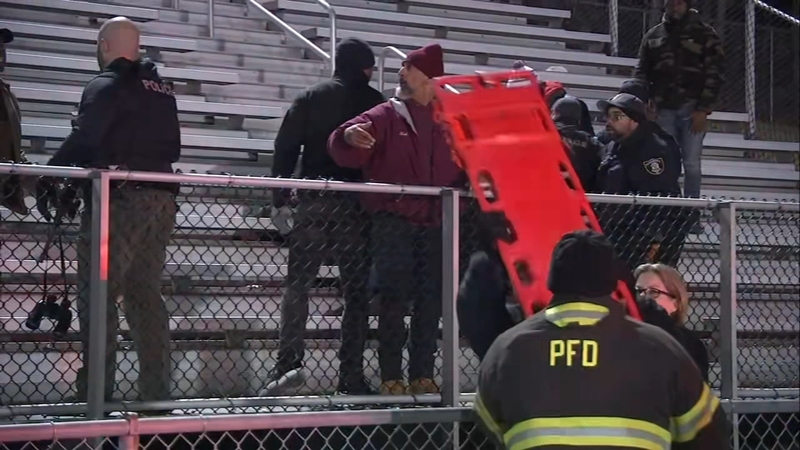 As shots rang out in Pleasantville, New Jersey during the third quarter of the playoff game against Camden High School, many ran for safety.

But not Atlantic County Detective Nina Mitchell, who was off-duty and hoping to catch the end of the game.

"As I drove up, I could see all the kids just running out, the adults trying to get over the fence," she said.

Mitchell also happens to be a nurse, and ran inside.

Detective Mitchell says she ended up helping the 27-year-old victim, who police say was the intended target of the shooting, and also faces charges. Five others are charged in connection with the shooting that also injured a 15-year-old and a 10-year-old.

Boy remains in critical condition after shooting at Pleasantville football game. Christie Ileto has more on Action News at 11 p.m. on November 18, 2019.

Pleasantville Officer Jon-Marshall Robinson was on patrol that night and stopped at the game.

"After the first shot I think all of us were in disbelief and didn't want to believe it was a shot," said Robinson.

Once Robinson got a description of the shooter from a citizen, he quickly spotted someone who matched it.

"I immediately went after him and was able to apprehend him at the goal post behind the tennis courts," said Robinson.

That man ended up being Alvin Wyatt, who now faces three counts of attempted murder. Other arrests quickly followed.

"Without that swift action, without that collaboration, we simply would not have been able to wrap this case up as swiftly as we did on that evening," said Atlantic County Prosecutor Damon Tyner.

School district officials say the students are moving forward together.

"We had a lot of professionals we have those supports in place for the rest of the week and beyond if we need them," said Pleasantville Public Schools Interim Superintendent Dennis Anderson.

Pleasantville and Camden will have the chance to finish their game on Wednesday afternoon at Lincoln Financial Field.