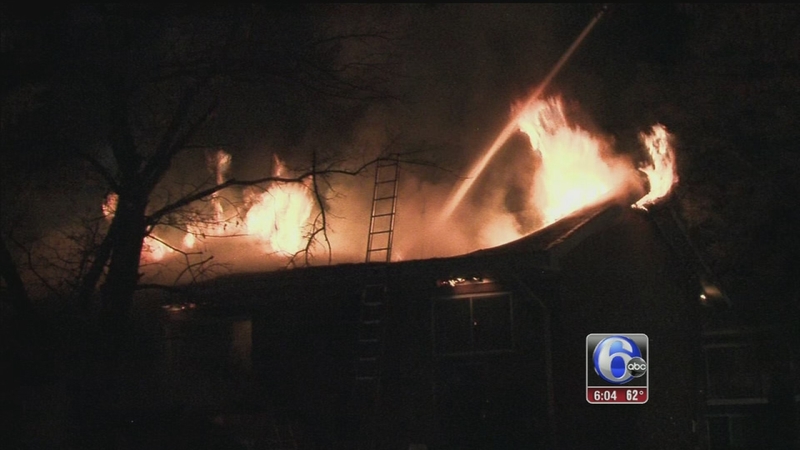 PLYMOUTH MEETING, Pa. (WPVI) -- A woman was killed in a three-alarm fire that destroyed more than a dozen apartments in Montgomery County.

The fire broke out just before 10:30 p.m. Saturday inside building D at the Plymouth Rock Apartments on the 1900 block of Sandy Hill Road in Plymouth Meeting.

When firefighters arrived, they were met with heavy flames.

Crews noticed a resident on the second-floor balcony.

Sandy Bricker had run out to the balcony after hearing smoke alarms and seeing a wall of smoke in her hallway.

Once outside, she called 911 and waited for firefighters to reach her.

"They put a ladder up and they climbed up and helped me get on a chair and climb down the ladder. I had nothing but my pants and my shirt, and no socks and shoes, someone loaned me their shoes. I probably lost everything," said Bricker.

Firefighters discovered a woman's body inside a burned apartment.

Jerome Baker Jr., who lives one building over, said he was arrested for disorderly conduct after he repeatedly tried to enter the building along with the victim's fiance in an attempt to save his friend.

"If I would've went in, she'd still be here," said Baker.

A number of neighbors told Action News they were celebrating Halloween when the blaze broke out. Some said they tried to do whatever they could to help as residents tried to escape the flames.

"One woman was running out and then that's when we accompanied her, gave her a jacket and made sure she got to the other apartment," said witness Praveen Barala.

The fire destroyed 18 of the building's 24 apartments.

The Red Cross is finding temporary shelter for 30 people now displaced. The Red Paw Relief team is also helping those who have cats and dogs who need a place to stay.

Officials said the apartment building had working smoke alarms, but did not have water sprinklers.

"There are some firewalls, but a lot of them had breached holes all the way through them so it'll run pretty quick. We did have a hydrant right out front that evidently got hit with a vehicle so that was out of commission totally so that's why the lines are running so far away down the street," said Harmonville Fire Chief Kevin Lawrence.