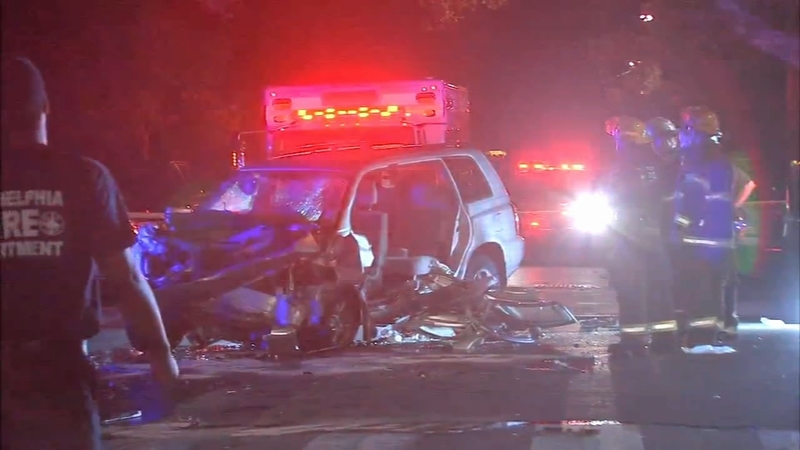 PHILADELPHIA (WPVI) -- Three teenagers are under arrest after authorities said they attacked a King of Prussia Mall employee, stole her SUV, and led police on a chase that ended in a crash with a SEPTA bus in Philadelphia.

According to police, it began as a woman walking to her car at the mall parking garage was approached by a boy, 17, and two girls, ages 17 and 14, while she was leaving work around 9:45 p.m. Tuesday.

Police said the boy asked the victim if he could use her phone to make a call. He handed the phone to one of the girls and grabbed the victim from behind.

"They choked her. Put her into a pretty strong chokehold to the point where she thought she about to black out. She was then punched by one of the females and then violently thrown to the ground," said Upper Merion Police Chief Thomas Nolan.

The three suspects then stole her 2005 Toyota Highlander.

"She does blackout for a period and when she comes to, the male is standing over her and threatens to shoot her," said Chief Nolan.

The victim was taken by Upper Merion Township EMS to a local hospital for medical care.

The stolen vehicle was spotted on I-76 near Gulph Mills. Upper Merion police initiated pursuit of the car while requesting the assistance of Pennsylvania State Police.

Once the suspects passed the area of City Avenue, State Police took over the chase.

The stolen vehicle exited I-76 at the Spring Garden Street ramp. The Pennsylvania State Police conducted a PIT maneuver at the end of the ramp to try to stop the suspects, however the driver was able to regain control of the vehicle.

Not long after, the suspects then crashed into a SEPTA bus at Spring Garden Street and North 37th Street in Mantua.

Upper Merion police removed the girls from the vehicle and began medical care. The 17-year-old boy, who was driving the stolen vehicle, had to be extricated by the Philadelphia Fire Department.

The two 17 years old will be charged as adults and both had to undergo surgery. The victim was treated and released from the hospital.