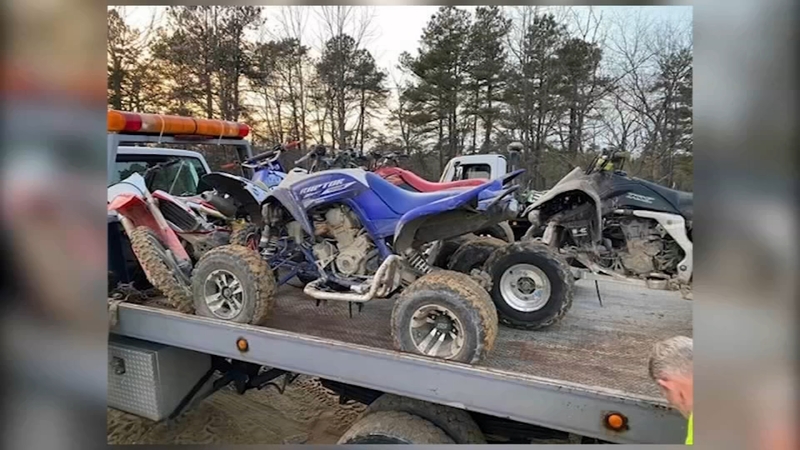 WINSLOW TWP., New Jersey (WPVI) -- Police in Winslow Township, New Jesey say they confiscated more than a dozen dirtbikes and ATVs over the weekend at a spot that's supposed to be used for hiking and fishing, after hundreds gathered there Sunday afternoon.

Gary Black comes to the lake known as Blue Hole in Winslow Township almost every day to walk his dog.

But he says the peace is frequently disturbed by people on all-terrain vehicles and motorbikes who leave behind tire tracks and trash.

"They come here with U-Haul trailers, some of them have a dozen of them on it. And they totally destroy this property," said Black.

Sunday afternoon around 3:45 p.m. police say it happened again. When police arrived they found about 100 ATVs and dirt bikes, and blaring music.

"The quads and the others started taunting the officers, driving circles around them. Just egging them on," said Lt, Chris Dubler of Winslow Twp. Police.

Many fled. But police confiscated 14 bikes and ATVs, and police say none of the drivers had registration paperwork.

Police also issued 16 summons for destroying property and arrested one person for an outstanding warrant - another faces drug charges.

Police say none of the drivers are from Winslow Township.

"We have a zero-tolerance for creating damage on the Pinelands woods area. The problem is the quads and the ATVs are tearing up the grounds," said Dubler.

Police say they are trying to figure out exactly who owns the confiscated vehicles, adding that at least three are stolen. The vehicles are still in police custody.