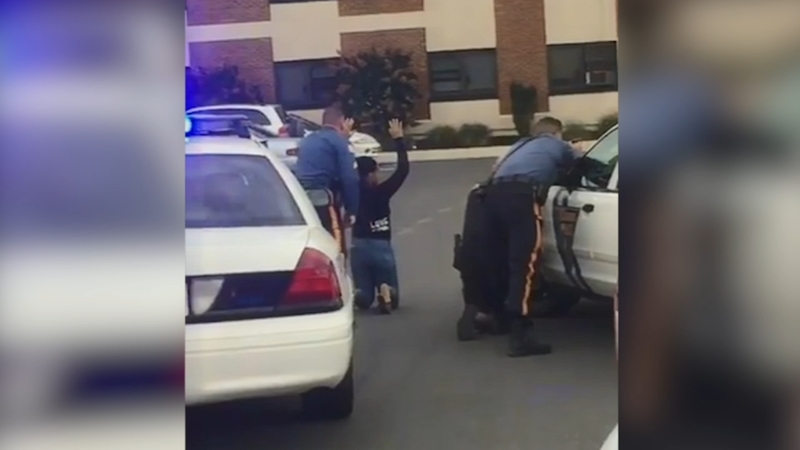 Many students captured the incident on their cell phones and then plastered the videos on social media.

Glassboro police are looking into the videos and investigating the incident.

The jaw-dropping encounter shows Altaif Hassan and Giavanna Roberson being pulled over on campus and several officers, with weapons drawn, surrounding the students and ordering them out of the car.

Hassan and Roberson said they didn't think they would make it out alive.

Roberson said, "It was very embarrassing. It was traumatizing. I've never had a gun pulled out on me, let alone multiple guns."

Both students were eventually questioned and released.

Officials say the students happened to be riding in a car that fit the description of a vehicle that was involved in a nearby crime. Police feared the suspects in a similar car were armed with a gun.

Rowan senior Briana Andrews witnessed the entire ordeal and says she had to record it.

Andrews says it was one of those moments you hold your breath and hope for the best.

"What is going through my head is that 'oh my gosh, I hope nobody gets hurt. Oh my gosh, that is an assault rifle,'" said Andrews. "I thought they would have just have regular guns. It was crazy."

Joe Cardona, Vice President of University Relations, admits this was a traumatic situation for the students involved and those who witnessed it. He says counseling is being provided to those who might need it.

"Some people see it as 'oh, those things happen,' but' of course' there are other people that believe this mirrors what's happening nationally and that national conversation, and that obviously brings out a lot of emotion," said Cardona.

As Glassboro police investigate this incident, the two students involved are hoping this sparks some kind of change and will force police to reassess how they handle similar situations.

"It could have ended any way," said Roberson. "My parents, my dad, he could not believe that it happened. He told me he had a nightmare."

Hassan says it is kind of like a routine now- when he sees a cop, he thinks of a gun.

"I don't think protection. I don't think serving me, like my tax dollars are going to a good reason. No. I am thinking these people don't like me," said Hassan.