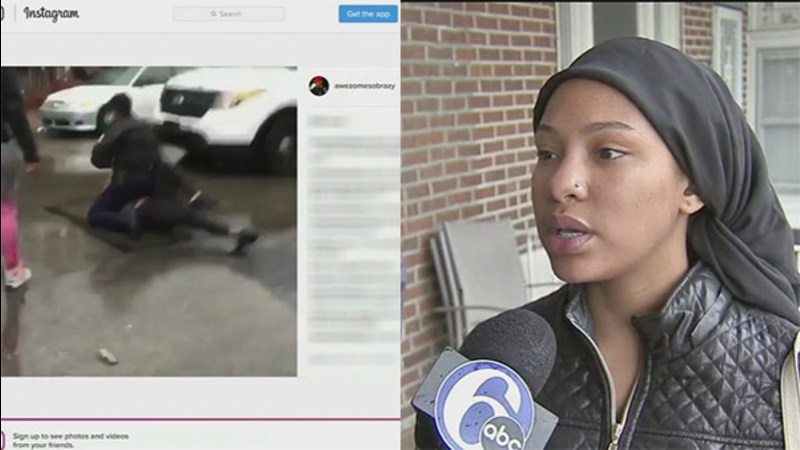 "It's just an ugly situation from start to finish," said Philadelphia Police Commissioner Richard Ross. "There's no denying that."

The melee was captured on cell phone video in Southwest Philadelphia on 54th near Springfield Monday afternoon.

Police arrived to find a large group of teens fighting in the street.

In the video, a 12th District officer and a teen, later identified as Pendleton, separate from the group.

Action News spoke with Pendleton Tuesday about what happened from her perspective.

Pendleton contends she was trying to help her friend's mother, who was being detained by police, when the officer started pushing her back.

"It went from there. She was dragging me by my hair, banging my head on the ground, on the car, punching me, sat on top of me and was punching me in my face," Pendleton said.

He said he found what he was witnessing "confusing" because he also thought the Pendleton was trying to back away.

"The girl was saying 'Don't touch me. You don't got to touch me.' Then, the next thing you know she just swung the little girl to the ground and started punching her," Douglass said.

Commissioner Ross says Pendleton was refusing the officer's commands, and the officer reported that the teen knocked her glasses off her face.

"One of the things that did not get captured on the video that the young lady admitted to in her interview is that she actually smacked the officer in the face, knocking her glasses off her face," Ross told Action News.

The teen told police she wasn't hurt at all, and the 12th District officer, with several years on the job, had minor bruising to her eye.

The officer's tactics are now under review by Internal Affairs.

"When I say tactics, it's a possibility, before they hit the ground, that something could've been done a little differently. That's not a legal thing as much as it is a tactical thing, but it's a decision that gets made in a split second," Ross said.

Pendleton was initially charged with assault on a police officer.

The district attorney declined to move forward with those charges and Pendleton was released from custody.

"I am happy that it was caught on video because if it wasn't, I would have been charged and I would've been in a youth study center or something," Pendleton said.

A source tells Action News the video and witness statements seem to indicate that Pendleton never intentionally tried to harm the officer.

"Both parties told the truth," said Ross. "There's not a whole lot of discrepancy between the two stories. It just doesn't happen that often like that."