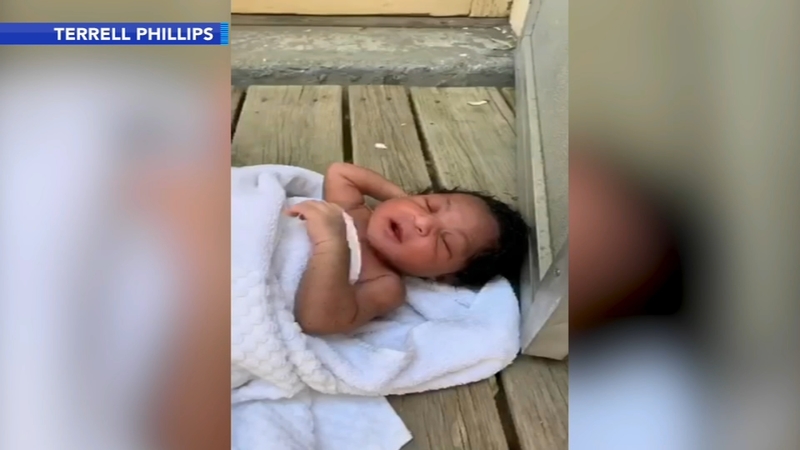 UPPER DARBY, Pa. (WPVI) -- Police say they have located the mother of a newborn baby found abandoned on a porch in Upper Darby, Pennsylvania.

According to police, the hours-old newborn baby girl was left on the 100 block of Englewood Road on Tuesday.

"It was the dedicated work of Detectives Ed Silberstein and Tommy Thompson that led to the mother of the newborn baby girl," said Police Supt. Mike Chitwood.

A 15-year-old from the neighborhood who apparently panicked, not wanting her parents to know.

"She was very, very forthcoming once she came in here with her mom," said Chitwood.

He says the 15-year-old mother of the baby girl says she had the baby late Monday or early Tuesday morning and took matters into her own hands.

"Cut the cord, bathed the baby, washed the child off, wrapped it in a blanket, put it on a porch." said Chitwood.

The baby was left wrapped in a blanket in 93-degree heat last Tuesday on Jeanne Daley's porch.

"The baby was lying here, a feral cat could have come along, squirrels, the heat. There were dangers." said Daley.

Luckily, a next-door neighbor discovered the baby. She was rushed to a hospital where doctors determined she was OK.

"Thank God we're not looking at a murder charge, that's all I gotta say." said the Police Superintendent.

The question now is, what will happen to the 15-year-old, who apparently did not know she could have lawfully dropped off the baby at a hospital, police or fire station, but now ultimately will be charged with recklessly endangering the welfare of a child.

"She's not arrested at this point in time, she probably will not spend a day in jail, she will get the counseling and help that she needs through the court system," said Chitwood.

While police were searching for the mother, hundreds of people went on the Upper Darby Police Facebook page asking to adopt the adorable baby girl. There were also numerous calls.

Chitwood said, "I mean I got phone calls as far away as Washington, D.C."

And many want to know what happens to the baby now?

"You know what happens with the child, I guess that's gonna be a protracted hearing whether the family decides that they want the baby or not, I don't know." said Chitwood.