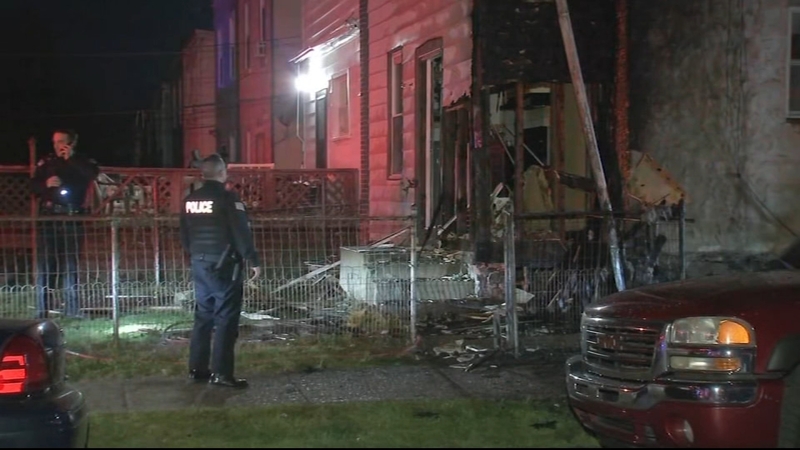 COLWYN, Pennsylvania (WPVI) -- Two Colwyn, Pennsylvania police officers entered a burning home to help evacuate a family as a US Navy veteran worked to extinguish the flames with a garden hose on Thursday night.

Ron Harris was inside his home with seven family members, including his four grandchildren, when his son told him smoke was coming into his room.

"When I came out the room, that's when I saw the glow coming through the windows to the bathroom," Harris described.

Harris spotted flames in the back at about 9 p.m.

"They were pretty intense," Harris added.

Harris says his Navy training kicked in, and he ran outside and grabbed a garden hose.

"I have close to nine years of Naval training and firefighting training," Harris said. "By the time I got really getting into it, it was already at the top of the roof so I had to start soaking the house down."

Officer Lucas Murray had a fire extinguisher and helped Harris with the flames. Officers Joseph Casciato and Nicola DePallo rushed inside.

"Officer Casciato picked up the infant, took the infant outside to safety. Officer DePallo returned into the residence and located a 70-year-old female, which he carried out on his back," according to Police Chief John Martinez.

Firefighters arrived and were able to extinguish the blaze, but there's extensive damage in the back.

Clark highlighted the work of the first responders.

"Everybody did a fantastic job, and I told my officers, 'You all did a good job,'" Clark said.

"They helped us. I appreciate them and the rest of the first responders and fire department that came out," Harris said.